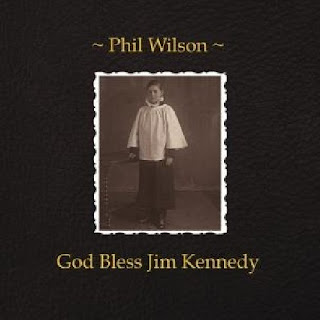 Phil Wilson - God Bless Jim Kennedy
Sometimes the good guys do win, and it’s great news that Phil Wilson’s God Bless Jim Kennedy LP looks like being a real success. Give the record a spin, and a few seconds in you already know this is a particularly perky collection, positively glowing with warmth and humanity. In these troubling times, when everyone seems self-centred and to have a hidden agenda, Phil’s return is especially welcome.
There have been many, many times over the years when I have found myself walking down the street singing one of Phil’s old songs, either a June Brides classic or one from his brief solo career. And there is plenty on this new record to suggest my whistling repertoire will be expanded to feature a few new Wilson wonders. This may not be good news for the world at large, but as someone who considers Hums Of The Lovin’ Spoonful to be the best album title ever it’s a boon to have some new tunes.
Phil’s approach seems breezily easy, but do not ever underestimate how difficult it is to write catchy, classy pop songs. For if it was a simple thing to do our lives might be brightened by a surfeit of snappy turns. Some are gifted, and some are not. That’s the only simple part. Any svengali worth their cut ought to get their poppets and puppets to cover one of the songs on this set, or indeed any gem from the June Brides repertoire. And don’t you raise your eyebrows at me. If Boney M can pluck The Creation’s Painter Man or The Smoke’s My Friend Jack out of obscurity then anything is possible.
Ten years ago I wrote a piece on the June Brides, trying to capture my feelings about the 1980s. I doubt then I would have expected still to be playing Phil’s old songs quite as often as I do, and I am sure I would have been amazed to be enjoying a new LP by Phil as much as I am. What really surprised me on playing God Bless Jim Kennedy is that it is uniquely Phil Wilson. That’s not as daft as it seems. The radio drones on endlessly and it all begins to blur into one, whatever station you listen to, and anyone can be anyone. There’s lots of reference points, but very little identity or individuality. But this new record could only be a Phil Wilson affair. Credit must also go to the sympathetic musical setting, and the welcome presence of Jon on trumpet and Frank on the strings as in days of yore. I am guessing this LP has benefited from being able to take shape slowly and surely rather than a rush recording over a few days under the arches at Waterloo like Phil’s only previous LP. So sometimes the world's indifference has unexpectedly beneficial by-products.
This record may not solve the world’s ills, but it’ll put a smile on your face. If you want some of the ‘Phil-good’ factor, God Bless Jim Kennedy is released on 8 November by Slumberland Records in the US and Yesboyicecream Records in the UK & Europe.