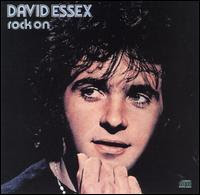 David Essex has done more than most to improve the public’s perception of gypsies. He has won over hearts and minds as a romantic Romany charmer of a pop star and in his official role as Patron of the Gypsy Council. Nevertheless the UK’s popular press persists in portraying the gypsy, Roma and traveller communities as feckless felons out to steal the land from under our feet.
David’s Rock On remains one of the greatest and strangest debut 45s of all time. It catapulted David into the pop stratosphere where he would remain. Hot on the heels of his appearances in the stage musical Godspell and the film That’ll Be The Day, Rock On was the perfect introduction to a unique talent. The pop audience instantly took to David’s disarming, cheeky Cockney persona, and his thinking tinker Jack-The-Lad gypsy charm. But what still gets lost is the sheer oddness and invention of his hits, even though in the ‘90s he was celebrated by a number of pop acts like Saint Etienne, Denim, Happy Mondays and Massive Attack.
On the first few David Essex LPs his teenybopper audience will have heard some curious cuts, which were a right old mix of Caribbean, Latin, Gospel , Music Hall, and the good ol’ rock ‘n’ roll that saved his East End soul. It helped having seasoned session men on board like Chris Spedding, the guitarist whose remarkable story spans free jazz, John Cale, Linda Lewis and The Wombles, via The Vibrators who appeared on TV with him when he performed his Mickie Most-produced hit Motorbikin’ . Spedding also produced the Pistols’ first demos.
The title track of David’s third LP, All the Fun Of The Fair, captures something of the enduring, strange fascination with fairgrounds which is that mix of bright lights and fun rides mingled with the greasy glamour of impending violence. Fairground folk, the travelling showmen, fortune tellers, and bare-knuckle fighters are among the clichés of gypsy culture in the UK, though quite what proportion of people involved with fairgrounds today are from a Roma background is very much open to debate.
Among the people who have helped gypsies in the UK find a voice was the writer, film maker and social campaigner Jeremy Sandford. He is remembered most for Cathy Come Home and Edna, The Inebriate Woman, but among his other works was Gypsies. Published in 1973 this was an attempt to allow gypsies to explain themselves to the wider world. It was updated and reprinted as Rokkering To The Gorjios in 2000 at the same time Sandford released a film, Spirit Of The Gypsies, celebrating the music and lifestyle of gypsies in the UK. David Essex and his (Pavee) mother featured in the film, and David is quoted as saying: “My mother taught me always to be proud and never to deny that you are a Gypsy. Gypsies are free range people and Gypsy songs are songs of the open road, of wandering and of liberty. A land without Gypsies is a land without freedom!”