Bless The Day #5: Stop This World 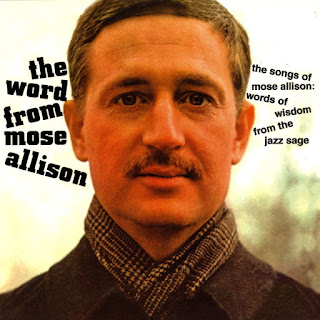 A casually caustic Mose Allison singing ‘Stop This World’ is something which seems very much of the moment, what with the way he suggests someone stopping this world, and letting him off, because there’s too many pigs in the same trough, too many buzzards sitting on the fence, and none of it is making any sense. Well, it’s easy to see where he’s coming from, and how it might be applied to the world today.


The song itself is a perfect example of Mose’s lightness of touch, the way he uses his wit as a weapon, with raised eyebrows and a studied nonchalance of manner. Mose and his piano are accompanied here by bluesy horns, which add to the drama. He may be down but he’s still the master of ironic inflections and acute observations delivered in a deadpan and detached wry way, the singer of songs which sting just as much as someone ranting and raving, yelling and hollering.
Read more »
Posted by Yr Heartout at 06:00 No comments: