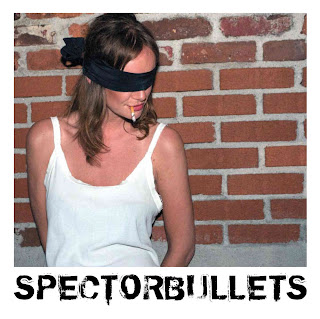 The world needs more records that provoke a response of: “What was that all about?” So Spectorbullets’ debut CD seems to be timed very nicely. Artfulness and absurdity are, after all, good weapons to use in the war on complacency, convention and careerists.
Spectorbullets is a creative collaboration between Scottish pop legend Russell Burn and (NYC-based) Swedish singer/songwriter Gustaf Heden. Given Russell’s record with the Fire Engines and Win, Spectorbullets’ approach was never going to be orthodox. And somehow Spectorbullets suggest something of the ‘lost’ cabaret tradition, in the true tavern/cafe ‘let’s put the show on here’ sense of improvisation, agitation, immediacy and irreverence. It’s easy to imagine the duo as part of a show that provokes and pokes fun, with dancers and chorus and chaos, where it’s hard to distinguish performers from spectators.
Musically, occasionally, there is a suggestion of fingerclickin’ cool rockabilly swing which will appeal to devotees of Vic Godard’s What’s The Matter Boy? with the odd wild waltz thrown in. The undervalued yet astonishing series of LPs Pere Ubu made for Rough Trade in the early ‘80s would be another handy reference point. Generally, Spectorbullets can be as sardonic as Snatch, as sassy as Sparks, and as swaggering as Svenonius. Those who have cheered on the Fiery Furnaces for years from the sidelines will approve of the ambitious approach, and the rush of words and noise.
The duo’s DIY driven determination to leave (or add) in the rough edges is to be commended. Spectorbullets realise there is no sense in trying to compete with the young entrepreneurs and ambitious pop apprentices. There are other battles worth fighting. And being able to ‘indulge’ their artistic appetites on the new Mayakovsky Produckts is worth as much as fleeting success. Having said that, the rush and roar of the recent hit single Mayakovsky it Ain’t (Chaos It Is) already has the feel of a pop classic and is incredibly infectious in that nagging Nectarine No. 9 way.
The label itself, Mayakovsky Produkts, is a partnership between Russell and writer Innes Reekie. It’s to be hoped they’re urging each other on to be more absurd, arch and antagonistic. For now, the Spectorbullets CD is a great start, and a lot of fun.
Posted by Yr Heartout at 03:16