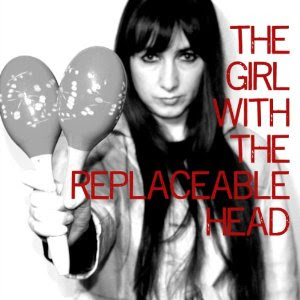 The Girl With The Replaceable Head - Death In Gateshead
“You’ve either got it honey, or you ain’t” claimed the Rich Kids, and it’s oh so true. The Girl With The Replaceable Head certainly has it. And I need to tell the world about it. Sometimes it’s tempting to write about a record as soon as you have it. Other times it’s better to wait, and write about how you feel about a record after having lived with it for some time. The Girl With The Replaceable Head’s Death In Gateshead is a record I’ve played maybe more than any other over the past few months. It’s something quite beautiful.
It would be a waste of time to describe what The Girl With The Replaceable Head’s record sounds like, who Sylvia sings like, and so on, because many people could take the same materials and not come anywhere near to creating anything as special. So, instead, this is what The Girl With The Replaceable is really like:
· Reading Patti Smith’s Just Kids and imagining what it was like to hear the young Patti sing her poetry with Lenny Kaye playing his guitar in the background;
· Knowing your battered box set of Cassavetes DVDs is worth so much more than any new Apple gadget or accessory;
· Sitting on a crowded bus into town on a wet Thursday and dreaming of driving down to Mexico with Kerouac and Ginsberg spontaneously spouting poetry as the car radio plays jazz in the background;
· The occasional violence you feel towards your home town when you can’t remember what’s keeping you there;
· Hearing those other Nancy & Lee songs for the first time;
· Playing The Long Night Out by the Blue Orchids for the first time in a long time;
· Buying a Richard & Mimi Farina record because you’ve fallen in love with the cover;
· Thinking of the young Jonathan Richman and Robert Quine following the Velvet Underground;
· Understanding why the sequence goes The Fall, Feelies, Fire Engines, Françoise Hardy, Frank Sinatra.
· Knowing intuitively what to leave out and what should never be there in the first place.
In her own words The Girl With The Replaceable’s Death In Gateshead is “an 11 song soundtrack executed to varying degrees of low-fi vibration, played against a backdrop of ‘60s brutalist architecture and small town un-creativity. Lost concrete souls, unwittingly interwoven, all searching for something (who knows what).”
Somewhere in the background Taffy plays a very famous Fender Jaguar. Together Sylvia and Taffy have made me remember why I love pop music. That’s not as daft, or as simplistic, as it seems.
Death In Gateshead is available on vinyl only from outlets wise enough to stock it, or go ask The Girl direct at http://www.myspace.com/thegirlwiththereplaceablehead