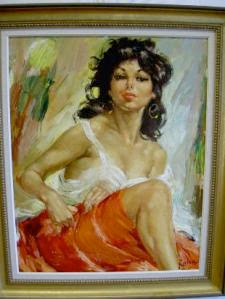 “From nowhere, through a caravan, around the campfire light, a lovely woman in motion with hair as dark as night. Her eyes were like a cat in the dark that hypnotised me with love.”
There are few better things in life than the sound of Curtis Mayfield singing with The Impressions. Kent Records did the world a special service in the 1980s by making The Impressions’ 1960s recordings available again. Apart from the group’s sweet, sweet harmonies Curtis possessed the gift of making the familiar spark into life anew, and when he sang about a gypsy woman dancing to a guitar melody the image is so strong.
It’s well documented how influential The Impressions and in particular Curtis Mayfield were in the development of reggae, particularly during the rocksteady era when exceptional vocal outfits and singers thrived. There have been many Jamaican interpretations of Curtis’ compositions, such as Queen Majesty which was covered countless times. The fascinating thing is that even the reggae experts seem unsure why Curtis Mayfield made quite such an impression on Jamaican performers.
Gypsy Woman is another Curtis creation that has been widely covered, by Joe Bataan, Bobby Womack, The Persuasions, Jay &The Americans, and Bryan Hyland, among others. In Jamaica it was most famously covered by Slim Smith with the Uniques. It may be sacrilege to say so but Slim’s singing is somehow even more magical than Curtis’. There is something of an edge to the sweetness, and what is known about Slim’s own tragic story adds to the mystique.
There have been plenty of other reggae related covers of Gypsy Woman. Marcia Griffiths twisted things slightly to sing about her Gypsy Man. And the Mighty Diamonds, Milton Henry and Junior English are among those who have recorded fantastic versions. The gypsy theme is also a recurring motif in Jamaican music. Back in the days of bluebeat and ska Derrick & Patsy sang about another Gypsy Woman, as did the Prince Buster-produced Frank Cosmo, while Errol & His Group had a track on Bluebeat entitled Gypsy. Tony Gregory and Eddie Lovette later had success with Gypsy Girl, with Eric Bubble sang Fe-Me Gypsy.
The Jamaican gypsy motif may not need to be examined too closely. Around the world gypsy is shorthand for romance and mystery and wildness and freedom, and thus perfect for reggae music and its rebel soul. And yet Romany historians will be able to tell tales about how in days long ago Spain deported gypsies to the West Indies, and England and Scotland similarly sent gypsies to the Caribbean. There are even tales of freed slaves owning gypsies in Jamaica. If, however, you read the story of how Tony Gregory came to write Gypsy Girl you get more of a sense that it was something that felt and sounded right. And he might have had something because at the time many a living room around the world was decorated with a Charles Roka reproduction of a painting on an ‘exotic’ gypsy girl theme, much to the disgust of the serious art audience.