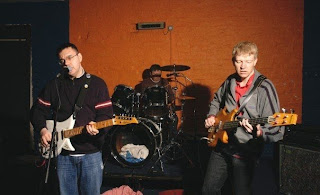 Hellfire Sermons - Luminous Crocodile
The best things in life are worth waiting for, so it’s only appropriate that the Hellfire Sermons debut-ish CD is something pretty special. What was it, 1987, the Hellfires’ first single Freak Storm came out? Since then they’ve been a bit like a G.K. Chesterton secret society, whose members convene occasionally. And now their activities are exposed.
For those in on the secret over the years, who have loved the Esurient & Dishy singles, or the (Bus Stop) Hymns: Ancient & Modern collection, the new CD will be a joy as it’s instantly and irrefutably very much the Hellfire Sermons. The only thing that’s changed is that singer Colin Pennington has taken his howls elsewhere. So there’s a little more vulnerability about the group nowadays, but that unsteadiness is very endearing.
For anyone not familiar with the Hellfire Sermons, it’s worth explaining they were once upon a time surfing a new wave that was going to sweep all sorts of old nonsense out of the way. Lots of hopes were resting on them, but they and arguably their labels did their best to confound expectations. This was a time of great debate and theorising. The state of pop was closely studied, and it was agreed that there was a specific strain of music that went through The Action, Easter Everywhere, through Chairs Missing , Fast Product/Pop Aural, The Fall, New Order’s Movement, the Go-Betweens’ Send Me A Lullabye, James’ Hymn From A Village, Who’d Have Thought by Hurrah! And that this pop tradition could be captured in an equation defined as P.E.P.S. That is Pop x Edge x Punch x Depth. The Hellfire Sermons had that in abundance. A magic formula.
Hellfire Sermons may still be the strangest band in the land. And they still have it (P.E.P.S.) in abundance, actually. There is still a gripping battle between melody and havoc, sweetness and abrasion. And they continue to get the balances right. Very right. This is still how pop should sound more often. Even when they’ve given the world every opportunity to catch up, the Hellfire Sermons out-pace everyone. The content is as oblique, abstract, cutting and pointed as ever. The tunes are as irresistible too.
It would be tempting to go on about individual songs, but they are all instant classics. And so it’s time to take up placards and take to the streets to spread the word. You need this record. Trust me! For lovers of modern dance and snappy turns, Luminous Crocodile is out now on the group's own Hidden Heartbeat label.
Posted by Yr Heartout at 19:57