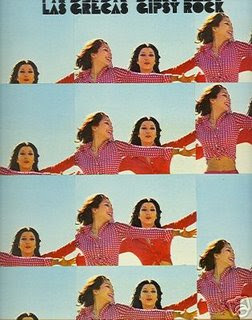 Stumbling uniformed on a clip of Las Grecas dancing along to their hit Te Estoy Amando Locamente it’s tempting to think: “Aha Baccara”. But anything more than a brief glimpse reveals how wrong this reaction would be. The girls’ singing and dancing, in perfect unison, almost disinterestedly, is mesmerising, and the combination of their strident voices and the wailing rock guitar suggests something very different than the Euro-pop norm.
Investigating further it becomes clear Te Estoy Amando Locamente was a massive hit in Spain in the mid-1970s, and remains a karaoke favourite there. Logically it would have formed a part of many holiday makers’ Costa Del Sol soundtrack, and yet it didn’t ‘crossover’ and remains, with its accompanying LP Gipsy Rock, pretty much unknown and unavailable in the UK, which is intriguing. There are not even that many facts about Las Grecas available in the English-speaking parts of the web.
It is possible to learn Las Grecas were sisters Carmela and Tina Muñoz Barrull, gipsies from Carabanchel Bajo, on the outskirts of Madrid. The two sisters, ignoring family opposition, appeared at many popular flamenco venues in the Spanish capital where they were seen performing by producer José Luis de Carlos, who signed them to CBS, and came up with the idea of putting them with a bespoke hard rock band, formed by the best studio musicians of the time. It was an international group which included Caribbean percussionists and a Portuguese guitar player, Johnny Galvao, who would become their main arranger. The repertoire was pretty varied too, ranging from funky flamenco to a cover of Brazilian ‘young guard’ legend Roberto Carlos’ Te Amo, Te Amo.
The sound on Gipsy Rock and other Las Grecas recordings is pretty unique. At times there seems to be an Arabic/middle eastern feel to the girls’ singing in its eerily dispassionate harshness. Another reference point would be Ruth Copeland’s magnificent recordings for Invictus in the early ‘70s. And the Parliament/Funkadelic connection is not as odd as it might seem, and certainly no more strange than a cover of a Spanish hit (Oh Lord, Why Lord by Los Pop Tops) appearing on the first Parliament LP.
Later Las Grecas recordings have more of a disco feel, though these still don’t really have the populist appeal of the cosmopolitan Common Market-produced Baccara, who were a Spanish duo, discovered in Germany, placed with a Dutch producer and a German songwriter who was married to one of the Liverbirds (beat group). Baccara, as is well documented, have their own unique place in pop history, with Edwyn Collins telling the world that the lyrics of Intuition Told Me So (pt 2) were borrowed from the Baccara hit Yes Sir I Can Boogie, which goes: “Already told you in the first verse, and the chorus …” One of the great enduring moments of Eurodisco.
The Las Grecas story may have had a tragic ending, but there are still some majestic recordings to track down and a film to be made of the Las Grecas story.