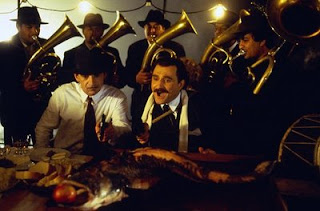 Emir Kusturica’s Underground has been credited with sparking an interest in Gypsy Beats and Balkan Disco, which somehow makes you believe in the human race all over again. Anyone who has been fortunate enough to see this film at the cinema or later on video or DVD will surely have been consumed by a sudden overwhelming passion for the Balkan brass band sounds that are used so effectively on the soundtrack. The music was created by Goran Bregovic and his use of the Balkan gypsy sounds eerily, illogically summons up suggestions of Mandrill, Pigbag, Fela, Bar-Kays, and something fundamentally anarchic and punk rock.
So it’s an appropriate soundtrack for a visual feast of a film that tells the story of firm friends Blacky and Marco from the eve of the Naxi/Axis invasion of Yugoslavia in 1941, through the resistance activities of Tito’s Partisans where as absurdly flawed Robin Hoods they cause as much mischief and disruption as possible while profiteering, through the post-WW2 non-aligned Communist era of ‘power, corruption and lies’, and the bloody madness that followed the fall of Communism. It’s a sprawling epic of a film, but it contains some of the most glorious scenes in cinematic history. The moment, for example, where Marco is fighting a collaborator is priceless, as Blacky joins in with the line: “No guys, we don’t play that way.”
Tito’s own instructions at the time, in response to the atrocities committed in the name of the Nazis, were for the different factions in Yugoslavia “to rise like one man in battle against the invaders and collaborators, murderers of our peoples. Do not falter in the face of any enemy terror. Answer terror with savage blows at the most vital points of the Fascist occupation bandits. Destroy everything – everything of use of use to the Fascist invaders.” That was the way Blacky and Marco did play, albeit by some very flexible rules.
Underground as a film had a wider than expected audience after winning the Palme D’Or at the 1995 Cannes Film Festival. It was not, however, the first time Kusturica and Bregovic had worked together. The soundtrack to the 1988 film, Time Of The Gypsies, was another of their much-loved collaborations, which again draws on the Balkan gypsy musical traditions wonderfully effectively and irresistibly.
There have been some amusing spats in recent years over the use of what can be loosely called Balkan or gypsy inspired sounds, with some concerned about exploitation. There have been those that have taken exception to Bregovic and Kusturica profiting from plundering the Roma musical heritage, as if they were a modern day musical version of the racketeers Blacky and Marco. The role of authenticity and adaptation in music is such a tricky issue, and one as old as the gypsy race, where it’s just as difficult to trace truth and origins. There is a case to be made for the rip-off of Roma music, but for the purists there are plenty of collections of original gypsy music from 78s, field recordings, etc. in circulation. While, for others, something like the Underground soundtrack could be the entry point to a whole new musical world.