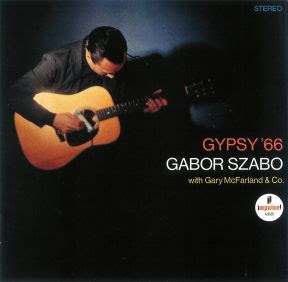 Gabor Szabo’s Gypsy ’66 was a pretty controversial record in its way. In the context of other Impulse! releases such as John Coltrane’s Ascension and Archie Shepp’s Fire Music it was bold to be performing pop hits of the day by the Beatles and Bacharach in an easy listening/bossa jazzy way. But label boss Bob Thiele and guitarist Gabor Szabo liked taking risks.
Gypsy ’66 was the first solo set by Gabor, but he already had quite a pedigree through his work with Chico Hamilton where he developed his distinctive single string style on sets such as Chic, Chic, Chico and El Chico, as well as the soundtrack for Polanski’s Repulsion. On the record Gabor worked with Gary McFarland, who already had quite a reputation for being brave enough to blend jazz and contemporary chart pop. Lovers of Gary’s work will warm to the arrangements on Gypsy ’66 and in particular the irresistible contributions on flute from Sadao Watanabe. The highlights of the record, however, are the title track and the complementary Gypsy Jam, where Gabor reveals something of his Hungarian origins with performances of a rather more experimental and exotic nature.
The links between Gabor and Gary would continue through to their cult label Skye Records in the late ‘60s, which they ran with Cal Tjader. Mike Alway’s él label and VampiSoul have done some excellent salvage work on Skye’s back catalogue. And Alway stimulated interest in Gabor’s work with a CD release pairing Bacchanal with 1969 for an audience more ready to appreciate the way the guitarist mixed pop with more adventurous aspects.
It was, apparently, one of Gabor’s regrets that he wasn’t taken more seriously as a jazz musician. And yet even in the ‘60s his influence was pretty powerful. His influence can be heard in Lee Underwood’s work with Tim Buckley. The Doors were fans, as were Santana. It seems to have been the track Gypsy Queen from Spellbinder, his second set for Impulse!, that seized other artists’ imaginations. And among those that covered it would be Leon Thomas, on his 1972 Blues And The Soulful Truth LP for Bob Thiele’s Flying Dutchman label.
Hearing Leon Thomas sing The Creator Has A Masterplan, on Pharaoh Sanders’ Karma LP for Impulse!, is one of the great pop experiences that people need to go through. Hearing Louis Armstrong joining Leon Thomas to sing The Creator Has A Masterplan is another life-affirming revelation, but that’s another story. It must have been tough for Leon Thomas living in the shadow of The Creator Has A Masterplan, so it’s worth making a case for his interpretation of Gabor’s Gypsy Queen. This ten-and-a-half minute virtuoso performance comes complete with all the howls, yelps, yodels, and speaking in tongues you would wish for. Leon’s extraordinary singing on Gypsy Queen is underpinned by Stanley Clarke’s fluidly funky bass and Airto’s dancing drums, complete with firecrackers that never cease to surprise, and if this combination doesn’t make the listener dance in an abandoned fashion ...