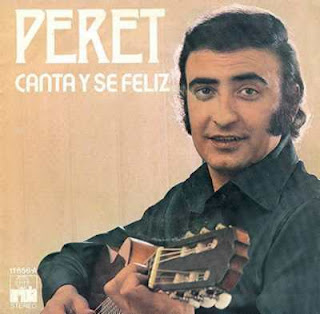 Anyone attracted to the Achilifunk - Gypsy Soul 1969-1979 collection and anticipating Van Morrison-style mysticism and Romani romanticism will be disappointed. Anyone, however, who has ever been bewitched by Bataan, Barretto, boogaloo and Fania fun ‘n’ frenzy will be delighted by this Spanish set.
Gypsy soul? Flamenco funk? Andalucian or Catalan rumba? While it’s likely the listener will be too busy hipshaking, fingerclicking, footstomping and handclapping to worry about appellations and authenticity, it’s easy to see how the music on this set would drive an ethno-musicologist to despair when the sounds seem to have absorbed just about anything going. The relation to the art of flamenco may be strained, but that irreverence is part of the fun of it.
There is an irony to a Cuban musical form flourishing in Franco’s Spain. Musical seeds are scattered on the wind, and take root in the unlikeliest of places. The Cuban rumba form embraced Spanish and African roots, and it’s amusing to see how rumba rebounded and flourished in parts of Africa and Spain. Rumba was particularly popular in Senegal, for example. And many people with a passing interest in global sounds will be familiar with the Orchestre Baobab’s legendary Pirates Choice collection. If for some the moment of musical maturity is when they realise they have more Neil Young records than they have LPs by The Fall, for others it will be when the rumba soaked sweetness and charm of Pirates Choice overrides the yen for something more obviously awkward and African.
One of the stars of the Achilifunk collection is Peret, whom the writer Alexandre D’Averc describes as “mould-breaking gitano genius, Pere Pubill i Calaf, his majesty Peret, who was to become the undefeated heavyweight champion of the rumba catalana. Peret crossed that local sound with his own great conception of music - colorful sounds, with flavors borrowed from every type of Caribbean music. Here was a Romany James Brown look-alike, who shook his hips in a way that even Elvis himself would have to admire. His records on the Discophon label sold like hot cakes en the early seventies, and in the wake of his success a whole generation of artists appeared on the scene. These were performers who had the know-how and the skills earned from hard graft under countless marquees and at neighborhood parties.”
Search for more Peret on YouTube and the chances are you will come across the revolutionary work of the TV director Valerio Lazarov, who left Rumania to work in Spain in the late 1960s. Hunt around and you will find his early TV production El Irreal Madrid, the title and content of which give a clue to Lazarov’s approach. During the 1970s he must have caused quite a stir in Spain with his disorientating techniques, surreal settings, and delightfully deranged dance routines, which were way ahead of their time in terms of pop presentation. Speaking of being ahead of its time, the music on Achilifunk (which covers a lot of ground) was so far ahead of its time Beyoncé and her Single Ladies have only just caught up.