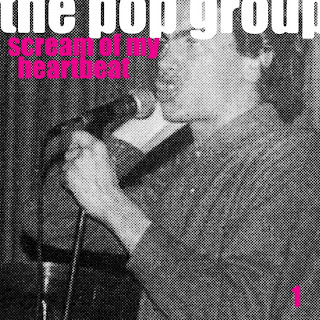 The Pop Group’s first live performances in almost 30 years were announced in July 2010. Among these were a couple of shows at The Garage in Highbury, which somehow didn’t suggest quite the sense of occasion needed. Nevertheless I was pleased to see The Pop Group would be back in action.
The recent revival of interest in all things post-punk had very much put The Pop Group’s name back in circulation. On the dubstep scene there was a lot of admiration for the work of Mark Stewart with the Maffia, Adrian Sherwood and On-U Sound. And Gareth Sager had only recently made a fantastic LP for Creeping Bent. So cynically it could be said it was a good time to get back together. But The Pop Group’s return was never going to be straightforward. It was always going to be more about unfinished business, rather than riding the revival chariot, given the personalities involved. After all, Mark Stewart and Gareth Sager had never taken the easy options in their work since The Pop Group split. And it seemed unlikely they could change their approach.
The idea of going to see The Pop Group in 2010 did not really appeal, but the return did make me think a lot about what The Pop Group meant to me, and the part it has played in my life. In particular, I began to think long and hard about the impact The Pop Group had on me as a kid in 1978. This was in part prompted by the appearance of a new website devoted to The Pop Group which proved to be a goldmine of old press cuttings. It was through the music press that I first found out about The Pop Group, and that was a tremendously important thing. That may sound daft, but I know I’m not alone in thinking that.
There had been an earlier site dedicated to The Pop Group, lovingly ‘curated’ in America by Dixon Coulbourn before his tragic death. Dixon had started the site because there were (in 1997) so few things on the internet about The Pop Group. This was at a time when there was very little interest generally in the post-punk era, and information was hard to glean. You would, for example, try to look up something about Ze Records and Manicured Noise and find something you’d written yourself.
In 2010 The Pop Group’s return was newsworthy, and a few articles and interviews began to appear. Among these was a Mark Stewart feature in The Quietus, a well-connected London-based online ‘rock music and popular culture’ magazine. I was genuinely excited when I saw links appearing for the interview with Mark which The Quietus ran in early September 2010. But it was immediately apparent that something had gone horribly wrong. I understand John Doran is the editor of The Quietus' site, and a trained journalist, but his Mark Stewart interview is a mess, and a sadly missed opportunity.
It is a feature in desperate need of editing, ironically. Even more oddly, Doran plonks himself right at the heart of the feature, while making a case in the comments for “the age of the cult of the all-important, conquering music journalist” being over. He also states that “at the end of the interview Mark gave me a big hug and told me I had exactly what I needed”. Mark was right, and had played his role to perfection. The Quietus writer just did not have a clue what to do with the raw material.
Was it absurd to be angry about a piece of poor journalism? It’s a fair question. There are a lot of more important things to get worked up about. And it’s only my opinion. The comments on the article were largely favourable after all. I was prompted to reassess the articles about The Pop Group that had stirred my teenage imagination more than 30 years ago. Was it mere misplaced sentimentality to feel so strongly about something from my own youth? Perhaps, but there is no denying the impact that articles about The Pop Group had on me in 1978, and the strange directions they indirectly sent me off in. It just seemed very unlikely The Quietus’ coverage could have the same effect. It’s a very different world in 2010 than it was in 1978, and I don’t want to perpetuate certain prevailing, lazy and largely inaccurate myths about a golden age of music journalism. But the thing about The Pop Group and me won’t go away.