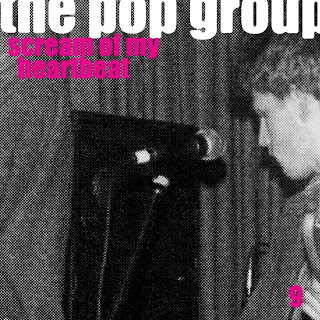 “Friday night at the London College of Printing, I wander the corridors trying to escape the crowds. Sure enough, as I had expected, I come upon the same figure. This time I notice that he is very tall and dressed in grey clothes. Mark Stewart, singer from The Pop Group (for it is he ...) is holding forth with the members of This Heat. The range of subjects is diverse, their nature obscure, his manner arrogant, opinionated ...”
In 1988 I got the chance to go and study journalism at the London College of Printing, right at the heart of the Elephant & Castle. I suppose I could have gone elsewhere but the LCP felt right. It had more of a punk pedigree than the very few other colleges that did journalism courses. Neville Brody had studied there, for example, and there were all those odd references to the LCP in old articles about The Pop Group. These were, I thought, perfectly reasonable grounds for a 24-year-old to choose an educational establishment.
Unlike Steve Walsh I never encountered Mark Stewart lurking in the corridors, but I did enjoy my two years at the LCP. Some of the tutors had links to Spare Rib and other parts of the pre-punk underground press I’d read about in a Dick Pountain book. I contributed to the college mag, which may have been the first collaboration between Rankin and Jefferson Hack. I learnt some invaluable things too. At the start of the course we had to write a 500 word article. This then would be ripped out of the typewriter dramatically, and we had to rewrite it in 250 words, then 100, then 50. If you keep doing that, it becomes a valuable discipline. I may have taken it to extremes at times, but that’s another story.
One of my favourite extra-curricular activities during my college days was to spend hours in the basement of the Record & Tape Exchange branches in Camden Town and Notting Hill searching through the boxes of discarded singles being sold off at 10p a time. I would hunt through all sorts of rubbish for anything that looked intriguing in the way of old reggae, soul, disco, funk, punk and odd pop. Of course lots of people like DJ Shadow and the Blackalicious guys were doing the same around the world. One of these 7”s I found, by Joe Curtis on the Spiral label, would be the catalyst for an edition of Your Heart Out called The Archaeology Of An Abandoned Soul Single, where I wrote:
“There is a case to be made for archaeology as a political act, as in the uncovering of evidence to support an attack on the status quo, the prevailing viewpoint.
So how did it come to pass that around 1989 I would be rummaging round, scavenging about for lost soul and reggae records in boxes of abandoned singles? Was it surreptitious political activity? An act of defiance against the idea that only what was lauded in the media was worth buying? In a way, yes.
Money at the time was in short supply. The economy was in a mess back then too. And we were in a situation where if you were making ends meet a few pounds for a half decent hip hop or house or underground pop 12” was a real luxury. Particularly if one of the sides was a ropey old remix. Instead you could get 30 abandoned singles at 10p a time. And, apart from the monetary considerations, the element of chance made this option so much more appealing.
There was something more though. A sort of spiritual bond with these rejected relics. I had my own reasons for identifying with these disposed of discs. I was painfully conscious that someone, somewhere, at some time had felt strongly enough, had believed enough, to invest in making these singles come to life. Someone believed these singles could make a difference to the world. And now for whatever reason they were to be found languishing in with the lost.
I felt a perverse pride in discovering the occasional genuine piece of treasure in among these piles of singles. I felt it was poetic justice to pick up a copy of Disco Dub Band’s For The Love Of Money or Horace Andy’s O Lord Why Lord, and later realise the significance of what I’d unearthed. The connections, the links, the stories, the way things fitted together. There was a moral tale here about value. And values.”
Closer to home, this was also a golden age for finding records at boot sales and in charity shops. People had started to buy into the CD culture where vinyl was considered redundant. And you could find all sorts of great LPs for next to nothing in a totally haphazard, wonderfully illogical way. Here too I believe the influence of old articles on The Pop Group, the Penny Reel mod story, and so on, with all their bewildering references had a lingering impact. I can still vividly recall the rush of blood and glow inside that came from encountering such write-ups that contained all sorts of mysterious references, accompanied by a real urge to play catch-up. I still regularly get that dizzy feeling, a sense of excitement, when I come across something on the web where there are all sorts of mentions of music I’m not familiar with, and while it may on some levels be easier to obtain information the hunger to seek out the new is still very, very much a part of me.
There is something of the autodidact in all this, with a voracious appetite for the unfamiliar, hoovering up information haphazardly, with no formal agenda or curriculum to follow. I am still not sure if I should thank The Pop Group and co. for setting me loose on this restless quest, or curse them for turning me into an explorer.
Posted by Yr Heartout at 02:07