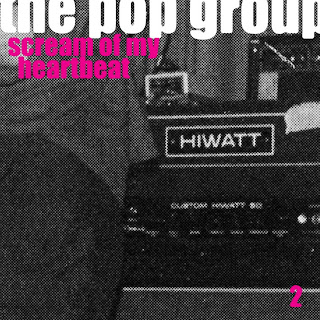 It was a photo of The Pop Group that I first fell in love with. I knew absolutely nothing about the group, but found the picture mesmerising when I came across it. It was a shot of the five members sitting around on some rocks, looking like they were discussing something quite deep. They were dressed predominantly in white, and looked fantastic. It was all so unlike anything else that was around at the time. There was something about the shot that suggested the image had been appropriated, as though they had taken a particular look, from another time and another place, and made it their own.
This would have been late July or early August 1978. Or could have been. The memory occasionally plays tricks. But I do remember being on holiday, spending hours reading the one edition of Sounds, the music weekly. I was 14 at the time. I seem to recall (my favourites)The Jam being the main article, with the photos featuring Paul Weller in three-button leather jacket and striped shirt as featured on the A Bomb sleeve. The shot of The Pop Group was featured in a news item about their John Peel session, which was about to be broadcast and was considered to be ‘important’. This may all be horribly wrong, but I do recall spending ages then and later studying that photo of The Pop Group. I cut it out and kept it in a scrap book for years.
I would never have been so attracted to The Pop Group if they had not have looked so brilliant. It was the same with Jack Kerouac as a writer. In fact it was no coincidence that I saw The Pop Group photo just as I was beginning to get to grips with the beat writers and the existentialists. Instinctively I made a connection. I am not sure why.
The same image of The Pop Group on the rocks was used elsewhere, in other music publications, and photos from the same session were used in the cover feature the New Musical Express ran in September 1978. It was a bold move to put a group who didn’t even have a record out on the front page, but there was a real buzz about The Pop Group at the time. There’s another great group shot on the same rocks, where this time Mark Stewart is standing with his back to the camera, looking very brooding. On the cover he’s got this fantastic ‘50s look which is partly an evangelical menacing Mitchum in Night of The Hunter and part haunted teenage heartthrob with dishevelled pompadour.
Over the years so many people have written about The Pop Group having an ironic name. One look at these 1978 shots would prove that this was rubbish and dangerously wrong. This was a group that at the time paid particular attention to its image, had a very defined and unique look, was incredibly photogenic and knew it. They had presence and persuasion, and wanted to use it. You can still see it in those photos.
These immortal images of The Pop Group were taken by Brian Griffin. He remembers that the shoot took place on Chesil Beach, near Weymouth in Dorset, and that it was an idea of Dick O'Dell, their manager. He also recalls the group was “so young and shy.” Images from the session were used in Brian’s book, Copyright 1978, a collaboration with the legendary Barney Bubbles, which he self-published at the time.
There are many reasons why the name of Brian Griffin will be familiar to music fans. Among these will be his cover photographs for the (four proper) Echo and the Bunnymen LPs, which it’s tempting to say have had a more lasting appeal than the records. In Bill Drummond’s book 45 he describes Brian Griffin as “a photographer and film-maker who understands power.”
So what was the power of those 1978 photos of The Pop Group? Part of it is to do with the fact they look like a group, or better still a gang which is something Mark Stewart does keep coming back to in interviews about how The Pop Group developed out of shared interests, going to the same clubs, and so on. The best groups do have that collective identity thing going on. 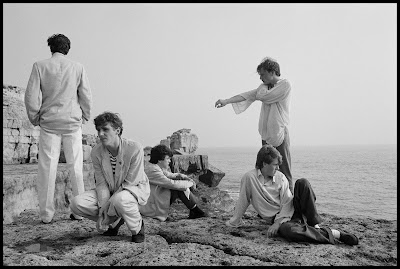 Photo of The Pop Group by Brian Griffin - Copyright 1978. Used with permission.
Posted by Yr Heartout at 03:46