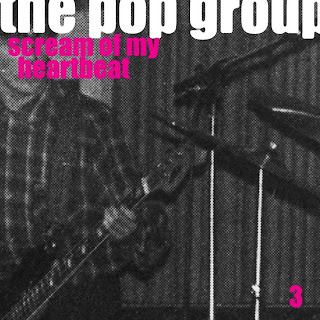 The Pop Group’s session for the John Peel radio show was recorded in early July 1978, and first broadcast in early August of that year. I don’t think I caught it when it was first aired, so it was probably one of the times when it was repeated that I first got to hear The Pop Group. I remember being impressed. I recall wanting desperately to like the group, and there was a sense the music was only one part of a whole significant thing. I knew The Pop Group was important, so I probably wasn’t going to admit I didn’t like the session. But I really was fine with it. If this was to be the future, then yeah I was on the side of the future. I certainly didn’t find The Pop Group difficult or inaccessible. This was pop, yeah-yeah.
The Pop Group’s Peel session did provoke some strong reaction, though. The Teenage Kicks site, which preserves the Peel legacy, recently featured The Pop Group’s session and referred to the memoirs of BBC engineer Bill Riley who rates it as ‘the worst session ever’. His account of recording the session is hilarious, pompous and a useful reminder of how music and attitudes in the punk era really did horrify some people. His views on the legendary first Slits session also make for a riveting read. In the booklet accompanying the Ostrich Churchyard compilation on Postcard Records Edwyn Collins tells a somewhat similar tale of when Orange Juice recorded its first session for John Peel in October 1980. It’s worth remembering that at that time Postcard’s Alan Horne set himself up in opposition to Peel the alternative establishment figure.
Despite the (occasional) patronising ‘producer as patrician’ or ‘paid technician’ approach, the Peel sessions invariably captured young groups early, in a way their own record companies failed miserably to do. In the book The Rock Snob’s Dictionary the authors send up this way of thinking: “Yeah, the Gang Of Four’s first album was okay, but it couldn’t touch the energy of the Peel sessions”. Irony is fine, but that statement was spot-on. The Dictionary was co-edited by Steven Daly, who had been the drummer in Orange Juice. Many people thought the same thing about Orange Juice’s Peel sessions and first LP.
The John Peel show and in particular the sessions really were an important part of my life between, say, 1978 and 1982. What was played on the show would form a major part of the conversations at school the following day. Where listening to the shows was an illicit pleasure, songs heard in session would be fleeting flashes of brilliance and strangeness that were never matched by later ‘official’ versions. There was no file sharing in those days, but a lot of cassette copying went on. And it was on cherished tapes that The Pop Group session lived on.
There were three songs on that session by The Pop Group. For years I thought I might have missed out on a track, as there were usually four songs to a session, until Wire’s Crazy About Love pop epic of late 1979. I don’t think I really realised until recently that the song We Are Time was almost eight minutes long. It doesn’t outstay its welcome. The Pop Group understood dynamics even early on. In journalism they talk about the importance of the killer opening. The Pop Group instinctively grasped that. Kiss The Book, for example, started with the fantastic line: “Searching for love in the library of a ghost town”. The Peel session version of that track would later surface on the We Are Time retrospective on Y/Rough Trade along with a variety of live tracks and demos. The Slits’ complementary volume features a recording of Sister Ray/Rock ‘n’ Roll Even from The Clash’s White Riot tour where in a communal moment with Subway Sect and The Prefects there is the chant of “No more rock ‘n’ roll for you” which Orange Juice would soon incorporate into their Poor Old Soul.
The Prefects and Subway Sect are brilliant examples of groups whose reputations grew through an alternative economy where Peel sessions were shared extensively. It’s impossible to measure the rate of exchange of tapes, but these groups’ BBC recordings had a life beyond the official music industry. It is easy to over-sentimentalise the Peel legacy, but impossible to underestimate his impact, for example on those too young or too remote for the ‘live’ circuit. He did play a lot of rubbish and had incredibly dangerous influence. But there is no escaping the fact that his shows in the punk era provided a context where what would now be considered ‘weird’ music strangely became the norm, and where the bedroom experimentalists had as much chance of being heard as the major labels’ latest heavy investment. It was, ironically, the major labels’ pricey productions that became the ‘difficult’ listens.
Posted by Yr Heartout at 02:57