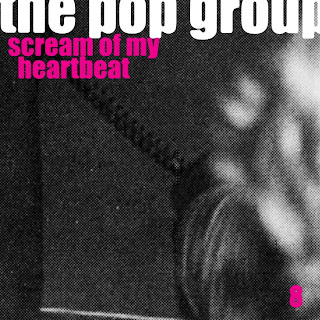 Vic Godard and Subway Sect were absolutely central to the Postcard Records phenomenon. This was very much fuelled by the release of the What’s The Matter Boy? LP,in the summer of 1980, and by the appearance of the Stop That Girl single, at the start of 1981. You would be unlikely to find any Postcard press that did not feature a reference to Vic Godard or Subway Sect.
The obsession with Vic Godard, which I shared, had me seeking out earlier copies of Zigzag, which were relatively easy to get hold of. This was how I got to see the Subway Sect feature from September 1977 where the group is pictured standing outside a hairdressers, 'Midweek Jubilee Cut and Blow £2.75' sign in the window, and they look so great: Hush Puppies, the whole mod refugee look, complete with matching sneers. Then in the April/May 1978 issue there was a great article on Subway Sect in Paris by Robin Banks. A cassette of a 1978 Subway Sect Gibus Club performance would be a ‘must have’ accessory in the Postcard era. Robin Banks wrote two other essential Vic Godard features for Zigzag over the next couple of years. 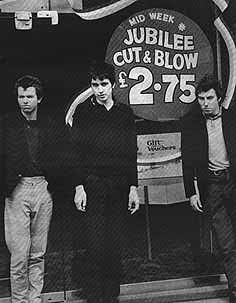 That April/May 1978 edition of Zigzag also had a great article on The Pop Group by Steve Walsh, who also wrote the 1977 Subway Sect feature. In the years to come these two articles would be hallowed texts. The Subway Sect feature is the one where they really come out with 'we oppose all rock 'n' roll' angle, and talk about Debussy, Satie and Abba. The Pop Group one is fantastic for the intoxicating sense of Steve finding kindred spirits:
“I find myself sitting in Bristol, in Mark’s bedroom to be precise. I also find myself surrounded by mark, his elder brother Paul (a legend in his own right incidentally ...) and Gareth Sager, the group’s rhythm guitarist. Our main preoccupation is the content of a tape that is being put together for playing at the gig tonight at the University’s Anson rooms. The tape, eventually, never gets played. A great pity. We’d already got tracks by Miles Davis, Booker T., Tom Waits, Charlie Parker, dub, Pierre Henri ... ‘What shall we do next?’ I sift through a record collection containing albums by Ornette Coleman, LaMonte Young, Gavin Briars, and Other Obscure releases ... Did I observe any Steve Reich, Philip Glass, Stockhausen, or were these just names that ‘cropped up’ in conversation? Now careful ... I’m not, I repeat NOT, citing these records as ahem ‘influences’, it’s just my penchant for bare-faced ‘namedropping’ revealing itself.”
It’s tempting to think of Mark E Smith’s line about academic thingies reeling off names of books and bands, but that particular hat never suited Subway Sect or The Pop Group. The Gang Of Four, sure. There was always something a bit too Students Union radical chic about them. But with Subway Sect and The Pop Group there was more of a sense that they just happened to know so much so very young. They were incredibly precocious, but it suited them to be talking nonchalantly about being in their early teens going to see Godard films, going out to funk clubs, going to see the Pistols on their old boneshakers, reading the French and Russian writers, and absorbing a bewilderingly wide range of arcane knowledge. I was totally in awe of them and what they seemed to know.
Subway Sect and The Pop Group have always seemed closely linked. I don’t just mean the “everyone is a prostitute” vs. “we are all prostitutes” thing. Mark Stewart has mentioned how the early Subway Sect was a real inspiration for him. There was also something about the look of the two groups. Lawrence once referred to the significance of the pleated trousers, the vintage Sinatra-style of dressing that the two groups adopted. I hadn’t realised until recently that Steve Walsh also had a short piece in the New Musical Express on The Pop Group, a variation on the Zigzag piece using that wonderful ‘beatniks of tomorrow’ line again. It’s accompanied by a John Spink photo of The Pop Group in a church. In another shot from the same session you get a better sense of The Pop Group wearing the old overcoats the Liverpool/Manchester groups would later become synonymous with. 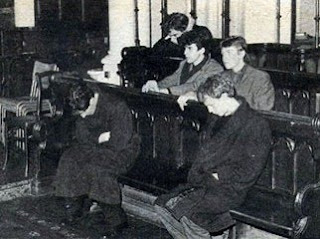 Steve Walsh was a name I knew from his time with Manicured Noise, a group with the coolest rhythm section around that put out a couple of great punk/disco singles on Pre at the start of the 1980s. I first came across the name in the NME Book Of Modern Music, and then in early 1979 Manicured Noise played with The Pop Group as part of a package tour with Linton Kwesi Johnson (who was also produced by Dennis Bovell) and Mark Perry’s Good Missionaries. Among the venues they would play was St Paul’s Church in Covent Garden, also known as The Actors’ Church. This seemed a wonderfully romantic, un-rock ‘n’ roll setting for a performance, and appealed to my imagination no end. I have no idea if the reality lived up to the idea, though. Sometimes it’s better not knowing.
I remember next coming across Manicured Noise when Kid Jensen broadcast a session by the group on Radio One in late 1979 on his early evening show. I remember having the radio on while doing my homework in the kitchen, and absolutely loving the tracks I heard. I think this was before the singles came out. So coming across Steve Walsh’s earlier writings on music was fascinating. I wouldn’t even be certain it was the same Steve Walsh for many years, but the clues were there with all the references. His articles seemed like the blueprint for Manicured Noise. Now we are rather wiser thanks to the excellent Manicured Noise collection on Caroline True Records, which features that Kid Jensen session I had grown to think I had imagined. It still makes me smile to know that Mark Stewart was very much a presence in the studio when those songs were recorded.
Posted by Yr Heartout at 02:52