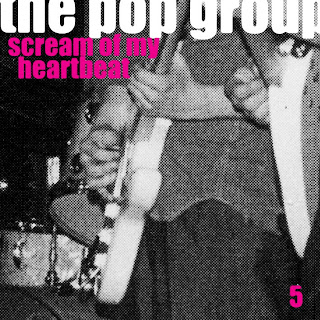 During the last quarter of 1978 the New Musical Express published its Book Of Modern Music in pull-out weekly parts. For a 14-year-old this encyclopaedia was something strangely enchanting. I kept my copy for years and years until it disintegrated, and I could practically recite certain passages.
To an extent the book revealed some of the mysteries of punk’s origins, but more excitingly it pointed to the future with some thrilling text about what would come next. The weighting of the words would bear little relation to sales. So, for example, Pere Ubu would be prominently placed, and The Pop Group enthusiastically endorsed:
“The flat, no-clues name is designed to mislead and intrigue. Apart from the sharp threads and regular instruments they don’t live up to it in any conventional sense. Rather they seek new ways with old means, cleverly deploying musicianship learned on the job (only one member was remotely proficient at their inception in May ’77) and deliberately using the seclusion from the spotlight that living in Bristol brought them to cultivate fresh sounds from fresh sources. They have no contemporaries and carry few, if any, comparisons, forcing audiences to respond on immediate instincts. It’s a very open music and an unexpected, inexplicable pleasure.”
The New Musical Express had shortly before published its Encyclopaedia Of Rock, but I didn’t realise that until much later. So the Book Of Modern Music reinforced a sense of history really starting with punk. It also mattered a lot that the Book looked so great. This was the imagination of Barney Bubbles at work with his design team. Much as I loved the look of the Book I don’t think I realised who designed it, or understood the significance of it.
I suspect the only designer whose name really registered with me was Malcolm Garrett with his Buzzcocks artwork, which I loved. A little later there would be Al McDowell and Rocking Russian (and the State Arts t-shirts) then most importantly Neville Brody. Oddly I never connected with Peter Saville’s work, even though I loved much of the Factory Records output. I realised there were lots of clever references (partly thanks to the famous Jon Savage feature in The Face on The Age of Plunder) but Saville’s sleeves didn’t excite me.
I’m pretty sure that in 1978 I didn’t know who Barney Bubbles was, even though I had several Stiff/Radar releases he would have designed the sleeves for. Nevertheless I loved his picture sleeve for Generation X’s Your Generation (and still have the 45 symbol on a badge) and the LP cover for The Damned’s Music For Pleasure. I certainly would not have made any connection to his visual tributes to constructivism and op art, Kandinsky and Henryk Berlewi. Indeed it really doesn’t matter if you recognise the inspirations or not.
The graphic designer Andy Martin worked with Barney Bubbles on the Book Of Modern Music, and has referred to his “ability to look backwards and forwards at the same time, whilst always managing to arrive at The Very Point Of Now-ness". His observation gets right to the heart of how pop music/pop art operates. It’s certainly a phrase that could be perfectly applied to outfits like The Pop Group.
The first instalment of the Book Of Modern Music coincided with Barney Bubbles’ makeover of the NME, which was launched at the start of October 1978. In fact, it was the issue after The Pop Group’s cover feature, and this time Ari Up was on the cover. The Slits similarly had yet to release a record. The NME Book Of Modern Music seemed to disappear for years, but a resurgence of interest in Barney Bubbles’ work (largely due to Paul Gorman’s Reasons To Be Cheerful book) has brought it back into circulation.
One of the few ‘other’ places that the NME Book Of Modern Music is mentioned as a whole is on the Caroline True Records website. CTR is a label that has made monumentally important recordings by Manicured Noise and The Prefects available. These two groups are both mentioned by the unidentified journalists, though it’s tempting to guess who wrote these words about The Prefects:
“A Birmingham group formed in March 1977. Their music is as bleak, cynical and loveless as their personalities, with a perverse humour. Their relationship to orthodox rock music is tenuous, at the closest a horrendous doppel ganger parody. At its best their music can have a frightening, pulsating intensity. Suspicious and arrogant, they have no friends, want none and despite creating an evolving sound, their potential for recognition is limited.” 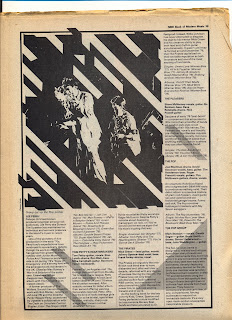 Extract from The NME Book Of Modern Music courtesy of John Kertland/Caroline True Records
Posted by Yr Heartout at 02:24