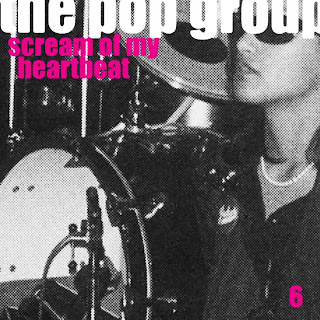 The Pop Group collectively dancing to an old Eric Dolphy tune is the striking image with which Peter Silverton started a front page feature for the music weekly Sounds in March 1979. I certainly didn’t have a clue then who Eric Dolphy was, but I loved the idea of a group grooving away to some mad jazz sounds in their own ‘living space’. The reference to the ghost of Charlie Parker in the same opening paragraph was at least something I recognised from the writings of Jack Kerouac which I was then exploring.
That particular issue of Sounds is one that has remained with me. The Peter Silverton feature on The Pop Group was excellent. The paper used (yet) another shot from the Brian Griffin session on Chesil Beach, and some new photos of the group wearing what looks like (I Was Lord Kitchener’s Valet) dragoon-style jackets. The cover mentions what was then the new Edinburgh group, Scars. They would have been just releasing their astonishing debut 7” on Fast Product, and this may have been where Dave McCullough described the sound as The Fall meets the Bee Gees. The same edition featured a particularly enthusiastic review of The Fall’s debut LP, Live At The Witch Trials, by McCullough who was then emerging as the most important writer. Some time later, in April 1980 he would write probably the most important article on The Pop Group and Slits and their relationship with the pop process.
The next time I recall seeing a reference to Eric Dolphy would be a decade or so later in Robert Elms’ novel In Search Of The Crack, a flawed but fun and I suspect forgotten read. In it he has a scenario where his narrator sets off on a train to a lost love, clutching a record wrapped in brown paper. The LP was a gift to his Rose, and was by Eric Dolphy: “a man of grave importance and rare beauty. She looked at it fondly as we talked for a few minutes about jazz. I told her that this record contained an especially sad song, and she touched my arm”. That scene I’m sure was very much in my mind when I did eventually buy a CD edition of Eric Dolphy’s Out To Lunch, which was recorded a week before I was born.
While Robert Elms is now a much-loved London broadcasting institution, he did once ruffle feathers in his role as writer for The Face and other publications. So when his debut novel was published he wasn’t, to put it mildly, universally respected. Nevertheless even in The Face he did champion some important new music, particularly on the mutant disco/Ze side of things. He was the first person I remember writing about Lizzy Mercier Descloux, and I will be eternally grateful to him for recommending Harry Thuman’s Underwater.
In the book Elms has a character use the line: “There was only one real mod, and he was Lee Daniel’s brother.” This was a direct reference to Penny Reel’s The Young Mod’s Forgotten Story, which started: “In the beginning - or so the story goes - there are only three real mods, and one of these is flecking Lea Davis' brother. Mind you, it is Lea Davis himself who first puts this about in general currency, which means it is not necessary true, as it is known locally and wide that Lea Davis is more than somewhat fond of his brother, whose name is Wayne and who is said to have the best collection of Jimmy Witherspoon records in London.” I’d learn much later that Alfie Wyatt once told Paul Weller about how early mods would dance to John Coltrane’s Olé, on which Eric Dolphy played flute.
Elms’ book makes a case for Tom Waits’ score for One From The Heart, which is fair enough. Tom Waits also features memorably in Glen Matlock’s memoirs, I Was A Teenage Sex Pistol, which were ghostwritten by Peter Silverton. Early on in the Pistols’ career some of the punk in-crowd went to Ronnie Scott’s to see Tom Waits, and Joe Strummer was hustling to get this gang of urchins in for free. Eventually Tom comes to the door in this big Crombie overcoat, and at one point proceeds to take out from an inside pocket of the coat a pint of Guinness with a perfect head on it which he drinks down in one go.
Matlock’s memoirs make for an entertaining read, and there are the occasional revealing flashes that remain with you more than the later, more acclaimed ‘theoretical’ tomes. One of these is where the earliest incarnation of the group is beginning to pay attention to the way it looked, and adopts a mod look with short hair, hush puppies and jeans. Matlock also gives considerable credit to Bernard Rhodes for making them think about what they were doing, and he mentions in particular the lifts home he had from Bernard ‘the teacher’ where they would talk through what they wanted to be and do. And, remember, free jazz was strongly represented in the famous Rhodes/McLaren love/hate ‘which side are you on’ lists.
Posted by Yr Heartout at 02:18