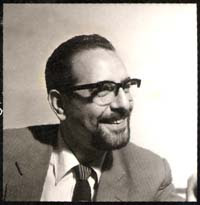 Denis Preston pops up with alarming regularity in Enlightenment!- the current edition of YHO which can be downloaded here. I have to confess it is only recently that it has dawned on me quite what an important role Denis played in the development of British popular music. His name features in so many remarkable stories, and yet it is only when you do a historical patchwork exercise that the true significance of this hits home. So, yeah, there’s plenty of mentions of Denis in Enlightenment!
What is Denis best known for? Probably nowadays as the man who gave Joe Meek his big break as an engineer in the ‘50s, giving him plenty of freedom to experiment with the mixing desk, until Denis’ patience ran out and he sent Joe out into the big wide world. Even that story has a sub-text of Denis as pioneering independent producer setting up his own (Lansdowne) studios in Notting Hill, and what was he doing when he finally ran out of patience with Joe? Making a record with Kenny Graham and Joe Harriott!
Denis’ name also crops up in the essential Honest Jons’ series London Is The Place For Me as the first man to record calypsos in the UK, with the likes of Lord Kitchener, and so on. The more I looked into this, the more I liked Denis. While there are plenty who question his technical abilities as a ‘recording supervisor’ there can be no doubts about his ability to put disparate elements and musicians together to see what happens. The absolutely perfect example of this than the sessions Denis ‘supervised’ where some of Humphrey Lyttelton’s traditionalists played with some of the West Indian jazz players who generally featured on London calypso recordings – and on this astonishing track from 1953 George Brown (Young Tiger) joins in the fun.
Another great example of Denis’ approach is where he got ex-pat US skiffler Johnny Duncan to record an adaptation of a calypso hit Last Train To San Fernando which features a wonderful latin-american guitar solo. Johnny Duncan was initially reluctant, but the net result was what Nik Cohn called the greatest British rock ‘n’ roll record. Denis (with Joe Meek) was pretty important in recording skiffle and trad in the late ‘50s, and other delights including a couple of records with Ramblin’ Jack. But Denis was always a jazz man at heart. And he never really seemed to embrace ‘60s pop culture, though he was involved in some of the cracking theme tunes recorded by his old colleague Laurie Johnson, like the one for The New Avengers.
At the end of the ‘60s Denis Preston supervised the recording of a remarkable Laurie Johnson project, Synthesis, which brought the London Philharmonic Orchestra together with many of the top jazz players of the day. This suite is now available on a terrific (value) triple CD set called The Musical World of Laurie Johnson. Among the players on Synthesis was the great Joe Harriott, who had a close working/recording relationship with Denis Preston from the early ‘50s to his tragic and untimely death in 1973. I have to confess I don’t know how the Fire In His Soul biography portrays the relationship between Denis Preston and Joe Harriott, but I have a very strong sense that the world of British jazz would have been far poorer and infinitely more dull without the presence of these great characters and visionaries. Preston one way and another (and these are only touched on and linked in Enlightenment!) helped in the recordings of talents such as Kenny Wheeler, Don Rendell, Ian Carr, Neil Ardley, and often put the players together with often startling results like the Hum Dono LP from 1969 which featured Joe Harriott with the Indian guitarist Amancio D’Silva, plus the always exceptional Norma Winstone on vocals. A review in Gramophone at the time described it as “an authentic piece of Indian-Caribbean-Occidental jazz! Records such as this prove that our music is still the only truly international folk music, with no language barriers.” Stephano’s Dance from that LP is a particular favourite.
Stan Tracey was another musician Preston was close to, supervising for example the wonderful Under Milk Wood suite. One of Joe Harriott’s final recording sessions was on a Stan Tracey Big Band tribute to Duke Ellington, which wonderfully saw Joe line up alongside Acker Bilk – the modernist and the traditionalist united in a common cause. Denis Preston wrote some glorious liner notes for that set, which are included in Enlightenment! And here you actually get to see Joe Harriott with the Stan Tracey Big Brass ...