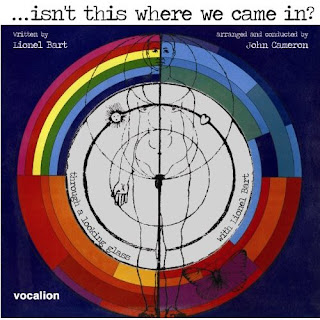 Enlightenment! is the latest issue of Your Heart Out, and it can be downloaded for free here. The cover star is Lionel Bart who was very much the inspiration for this new adventure. To be specific, it was the reissue by Vocalion of Lionel’s 1968 set ... Isn’t This Where We Came In? That proved to be the catalyst for this expedition. This extraordinary record actually, for once, lived up to my wildest dreams. Bearing in mind this LP would have been released around the same time as the musical of Lionel’s Oliver! it really is a work of a very vivid imagination. It was released on Deram, home of so much great psychedelic pop and progressive jazz, and John Cameron did the orchestrations so you know it would have to be something special. I find it one of the strangest, most moving, most inspiring records ever. Many of the best players from the progressive jazz scene are on there, and no expense could have been spared in its creation. It could be a work of absolute folly, but it makes a special sort of sense and tells a very specific story about watching a film of your life. Lionel was obviously very much inspired by the more adventurous pop music of the day, and creates something as outlandish as any of the big groups ever did. Ironically just as some contemporary groups like the Beatles, Small Faces, Kinks were using elements of the Music Hall tradition in their recordings, Lionel was approaching the psychedelic era from the other direction. One of the recurring themes in this edition of Your Heart Out is how, say, pre-r’n’r influences were rather more mixed up in some pop music quarters than has been recognised, and that is rather reflected in this astonishing Lionel Bart record. There is a bit of everything therein, and it works. It is, therefore, a great jumping-off point for the adventure that is Enlightenment! This is the single selected from ... Isn’t This Where We Came In? It’s but one piece in the jigsaw, and hardly a typical one, but it’s a wonderful place to start: