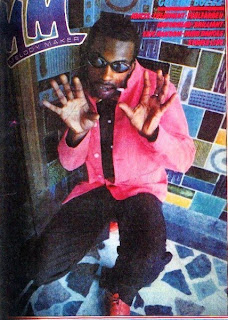 The second in the NME’s long-running series of tape compilations was Jive Wire. It was trailed as being “21 choice tracks by the cool, hot and crazy soundmakers of 1982, collected on cassette by the world’s sharpest music read, New Musical Express.” 30-odd years on it’s striking how well it is put together. The running order was clearly given some careful consideration as there is a definite flow to proceedings. Ironically, this programming adds to a sense of things falling apart in terms of a music scene becoming more factionalised. I can remember at the time feeling a sense of “oh yeah this-and-that selection of tracks are for me” while simultaneously feeling a definite sense of hostility towards certain other sounds/stances that were represented.
What I felt particularly enthusiastic about was the jazz related sounds, and particularly the sequence that went Defunkt, Rip Rig & Panic, Carmel, and Vic Godard. Those tracks were the ones I would return to, and feel a sense of affinity with. These were, after all, still sternly anti-rockist times, and jazz in all its guises and with all its connotations was emerging as an ideal alternative. Vic Godard was very much my hero at the time, resplendent in his tuxedo and bow tie, coolly clicking his fingers as he crooned for us hipsters. And Carmel who is featured with the magnificent Storm was the epitome of boho cool at the time, coming from an awkwardly avant-garde background but creating compellingly haunting music as a group with those incredible vocals to the fore. The Jive Wire cover design was illustrated by Serge Clerc, who would do a lot of work for the NME in the early ‘80s. Along with Mark Wigan and Ray Lowry he was the illustrator of the day. His particular emphasis was on a retro-futurist cool featuring be-quiffed young men in zoot suits and spats, playing saxophones, dancing with beautiful beat angels. He would appropriately go on to design the distinctive cover for Carmel’s debut LP The Drum when it finally appeared, produced by Mike Thorne of Wire fame.
The sections of Jive Wire I really felt uncomfortable with were the glossy ‘new pop’ parts where it felt like there wasn’t any room to breathe. In particular, it was the born-again glossicists that got to me: Thompson Twins, and Leisure Process which was the vehicle for the occasional Sounds writer Ross Middleton, a fervent evangelist for the ‘new pop’ movement. Ironically it would be David Gamson, who would later be an integral part of Scritti, who showed how the new funk could be done, with the stunning No Turn On Red. Gamson by this stage had already released a single on Rough Trade, albeit one (a radical electro re-imagining of Sugar Sugar) I believe which was rejected by Ze. No Turn On Red, nevertheless, in many ways sounds like the consummate Ze delight, almost too much so. Scritti are also represented, with the glorious reggae knees-up Asylums in Jerusalem. It is one of my favourite Scritti moments, though I confess it’s more to do with the simple pleasures of Green singing “Let him hip hop hippity hop ...” I seem to remember The Raincoats having a similar line.
Reggae is also represented here by Black Uhuru and by Aswad. The latter’s Ghetto In The Sky features a fantastic dub. There is a strong dub influence too in the funk/soul stylings of Buzzz whose Tonight’s Alright is an exclusive to the cassette. It’s an astonishingly good track. Buzzz released a few singles in 1982, got on the cover of Melody Maker, but you really get the impression they were too far ahead of their time. They were essentially reggae guys who’d played with Rico, for example. The singer was Dee Sharp who remains revered in UK lovers rock circles. He was, I believe, the first person to release a single on the legendary London label Fashion with the glorious Let’s Dub It Up.
The more primitive r‘n’r urges are catered for by Tav Falco’s Panther Burns and the Gun Club, and there can be no denying that the Americans were so much better at this than any UK counterparts. Theatre of Hate, whose Dreams of Poppies is included, really were never in the same league, but they were nevertheless a strange outfit with a remarkable underground following rather like Adam and the Ants had before the pop makeover. The closing track on the tape is Madeleina by Congolese soukous star Pablo, or to give him his proper name Pablo Lubadika Porthos. The full version of this was released as a 12” by Island, and judging by comments on the internet this track was for many people the entry point for investigating African sounds. It certainly sounds glorious, even now. And Island at the time, in its inimitable way, played an important part in promoting the music being made in Africa at that time.
It’s tempting to close with a video featuring one of the contributions by the ‘greats’ featured on this tape (Suicide's Dream Baby Dream, Kraftwerk's The Model, Gil Scott Heron's B-Movie), but it’s worth stepping sideways perhaps and including this 1984 Top of the Pops performance by Nick Heyward of his hit Warning Sign, which features a show-stealing rap/presence by Dee Sharp (post-Buzzz) which may be a little eyebrow raising for some ...