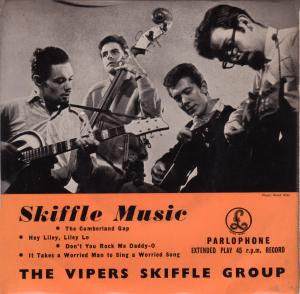 Enlightenment! is the latest issue of Your Heart Out, and it can be downloaded for free here. Enlightenment! starts with skiffle. “Skiffle swept Britain, not so much as a thing to be consumed but as a thing to do. Skiffle groups sprang up like mushrooms, & through them young people began to discover for themselves the roots of Rock music in the Blues & in collective playing. It was the first uniquely British pop movement. Apart from its simplicity & the Folk authority of the music itself, the vital aspect of Skiffle was that you needed very little musical skill & almost no money to play it. The point was that it sounded good quickly, required no study & developed the ‘ear’. It called for imagination rather than conventional skill or conventional instruments - & anyone could do it. Thousands of young people did.” That’s part of what Chris Cutler wrote about the skiffle boom in his book File Under Popular. It’s a fascinating read, and includes excellent stuff on Phil Ochs and Sun Ra. The writings of John Pilgrim on the secret Soho of the 1950s which are scattered around a variety of publications, proved to be one of the chief inspirations behind Enlightenment! He shed light of lives, places and events that are often overlooked in official versions. He was also for a while the washboard player with The Vipers, notorious skifflers, the first group to play at The Two I’s, and so on. Echoing some of the sentiments expressed by Chris Cutler, there certainly seems something very punk rock about The Vipers’ approach and their influences seem to have been spectacularly eclectic. Even with the guiding hand of George Martin at the controls there seems to have been something reassuringly rough about The Vipers. And given the course of events, The Vipers’ choice of Liverpool folk song Maggie May seems strangely prescient. Pilgrim and others put Lionel Bart right at the heart of the skiffle boom, holding court at south London boho hangout The Yellow Door where with his songwriting partner Mike Pratt he met merchant seaman Tommy Hicks. The rest is a familiar story – the story of Tommy Steele, Britain’s first rock ‘n’ roll star. But hopefully reading Enlightenment! you will realise stories are not always as simple as they seem. This seems, therefore, a very apt choice from 1957 ...
Posted by Yr Heartout at 01:15