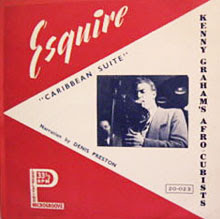 Kenny Graham features prominently in Enlightenment! - the current edition of YHO which can be downloaded here. He is someone whose name crops up occasionally in specific, discrete histories, but the overlaps are fascinating. Kenny is one of the most important figures in the development of British jazz music, as a saxophonist and as a composer. That national treasure Jonny Trunk has gone some way towards raising Kenny’s profile with the reissue of the fantastic Moondog and Suncat Suites, which features 1956 covers of compositions by the Viking of 6th Avenue and some of Kenny’s own compositions of a glorious homegrown exotica flavour. Trunk have also released a digital single of Kenny’s King’s Cross Climax from the Australian Suite he composed for the Ted Heath Orchestra. You’d be hard pressed to buy much else in the way of Kenny Graham product, except for some great tracks on an essential Sanctuary/Castle boxset of 1950s British jazz called Too Hot!
Kenny Graham is acknowledged as one of the most open-minded of British jazz musicians. His compositions used elements of African, Caribbean and Latin music, and his groups (notably his Afro-Cubists) often featured musicians originally from Africa and the Caribbean. One of Kenny’s most revered recordings is his Caribbean Suite from 1953 (later covered by Harold Vick) which features the gloriously infectious track Bongo Chant, which over the years took on a life of its own and gradually mutated into Bangarang, the early reggae hit made famous by Lester Sterling & Stranger Cole.
Kenny Graham also appears in the Colin MacInnes story, initially when the young writer Terry Taylor introduces his mentor to the sounds of Kenny Graham and his Afro-Cubists. MacInnes and Graham become friends subsequently, and work together on a musical drama which alas never got staged as events conspired against it. Kenny never really had much luck at all, and as ever the music business treated one of its truly gifted sons appallingly. He abandoned his sax, and concentrated more on composition. One of his finest moments came with the score for the 1963 Ken Hughes film, The Small World of Sammy Lee. This film features quite heavily in Enlightenment! and it links to many things, including Anthony Newley who put in such a great performance as Sammy.
One of the best things about the film is the opening title credits, with Kenny’s beautiful score playing as we see the streets of Soho as the working day begins and the camera wends its way down Berwick Street, Greek Street, Old Compton Street, past the restaurants, coffee bars and strip clubs. It’s a setting Kenny was perfectly qualified to compose for ...