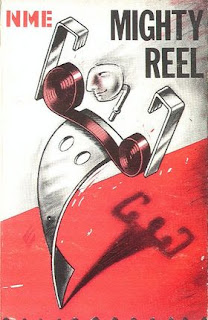 The Mighty Reel is perhaps not the most well-known in the NME’s series of tape compilations, but this 1982 collection is the best one the paper put out. It’s billed as “1982 – the case in favour.” It puts forward a great case. And 30-odd years on, it retains the power to get me scurrying off to seek out more by certain of the artists featured.
So, for example, the inclusion of Sleep Talk by Ornette Coleman got me listening to his 1982 LP Of Human Feelings, and becoming quite obsessed by it. I certainly never heard it at the time. I doubt I even saw it. But listening to it now it seems almost perfectly to feature the ‘active background music’ the Fire Engines were itching to get together. I don’t know how this record is regarded by real Ornette-thologists, but it seems pretty perfect just now, striking a balance between melodic jazz funk/functional fusion and something more punk and unsettling along the lines of the Contortions.
The track on Mighty Reel that really caught me unawares was Fashion’s White Stuff. I had totally forgotten about Fashion. I can’t say I’ve seen their name mentioned in years. But White Stuff had me searching for, and falling in love with, Fashion’s Fabrique LP. The ‘owner’s manual’ that came with the Mighty Reel sums it up pretty neatly: “Last year’s ugly ducklings, this year’s beautiful swans, Fashion confounded everyone except themselves with the depth and durability of their Fabrique album, produced by German studio whizz Zeus B Held.” Ah yes, Zeus B Held, of Gina X fame (who guests on the superb Love Shadow), who did Win’s Freaky Trigger, Chas Jankel’s Looking At You (and Chas’ solo LPs are an excellent reference point), Pete Wylie’s Sinful, etc. The fascinating thing is that Fabrique doesn’t sound like the suffocating records their Horn-rimmed contemporary glossicists were coming up with. It’s a really smooth, almost scarily adult-orientated disco/rock sound they came up with, with lots of space, which has aged really, really well. It was a remarkable transformation for what were Birmingham post-punk also-runs famous more for their hair than their flair.
The track that made me stop and hold my breath was The Ravishing Beauties’ Futility. It’s Virginia Astley’s adaptation of a Wilfred Owen poem, and her angelic chorister’s delivery adds a macabre twist to the studied beauty of the arrangement. Hearing it again made me listen anew to Virginia’s From Gardens Where We Feel Secure, and imagine vividly the sinister undercurrents which Michael Bracewell almost hints at in England Is Mine. The music may be an elegy to a lost English pastoral romanticism, but what are the circumstances in which the ‘dreams’ of this arcadia are taking place? It is a little like J.L. Carr’s A Month In The Country in some ways. It also makes me want to go and read some Denton Welch. Do people still read Denton Welch? They should.
I am not an authority on the music and life of Virginia Astley, and if I associate anything in particular with her name it is the Vic Godard track Spring Is Grey which was the cuckoo in the nest on the Rough Trade Retrospective which appeared carelessly in 1985. I have never been sure about the provenance of that song. Virginia’s arrangement has a real 1983-ish feel to it, and I believe Robin Millar produced, so it must have been after Vic’s swingin’ Sect had left to be JoBoxers. Robin Banks, however, closed a 1980 Zigzag feature on Vic with the line: “You’ve climbed higher up the ladder only to feel sadder than the holiest confession”. So I dunno ...
Futility was I think the only ‘official’ recording released under the name Ravishing Beauties. There was a Peel session, too. And I seem to remember Nicky Holland going on to work with the Fun Boy Three, who are also featured on the Mighty Reel with The Alibi. The FB3’s recordings still sound ridiculously underrated, and what they came up with in such a brief space of time seems remarkable, in terms of the music and lyrical content.
There is a strong and very welcome non-UK/US presence on Mighty Reel. The new European pop is represented brilliantly by Yello, Liaisons Dangereuses and The Honeymoon Killers. And what was then a lively interest in African pop was reflected by the inclusion of the JuJu sound of King Sunny Ade and a track from Rough Trade’s Soweto compilation. Demonstrating how the African influence was working at the time, Weekend contribute an exclusive ‘live’ take of their highlife flavoured A Day In The Life Of ... (as opposed to A Life In The Day Of ...), which still sounds glorious and is a useful reminder of how much ground Weekend covered on the classic La Varieté. Their Rough Trade label mate Robert Wyatt contributed what was then an ‘exclusive’ and totally gorgeous recording of jazz standard ‘Round Midnight.
Among the other tracks there are what-are-now recognised as complete classics by Brother ‘D’ with Collective Effort (“Agitate, educate, and organise”) and Rocker’s Revenge. The tape closes with dub poet Michael Smith performing Trainer from his Dennis Bovell/LKJ-produced LP for Island. We, sadly, will never know what Michael might have recorded next. The word ‘futility’ seems apt again to describe his appalling murder. I’m not sure why but I seem to recall Michael cropping up unexpectedly in a Jonathan Coe story. Or have I dreamt that? Anyway, here is a brief glimpse of Michael around the time of Mighty Reel ...