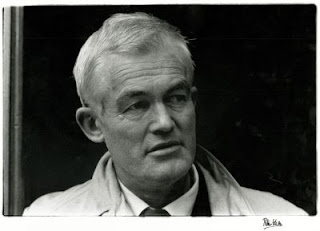 Colin MacInnes turned out to be pretty central to Enlightenment!- the current edition of YHO which can be downloaded here. I’m not sure what the world thinks of Colin MacInnes nowadays. You couldn’t , for example, borrow a Colin MacInnes book from any of my local libraries even if you wanted to these days. And that’s afore the cuts. Yet it was via my local libraries that I first got to read MacInnes’ London novels, with a little bit of timely prompting from Paul Weller 30-odd years ago. And what a revelation they were. Those, and the England, Half English collection of articles, were really important to me.
That damned Julian Temple film of Absolute Beginners has a lot to answer for, and I suspect MacInnes’ stock fell as a consequence. The last time I saw him mentioned in a positive way was by Val Wilmer who recalled MacInnes’ friendship with the ‘father of modern Nigerian music’ Ambrose Campbell. MacInnes would frequent the Abalabi club in Soho where Campbell’s group was resident, and he was godfather to one of Ambrose’s children.
I am still fascinated how, for whatever reason, MacInnes as a middle-aged man from a pretty privileged background became one of the first and best pop commentators. He captured important moments and expressed brave views in a way that can still delight. His best writing, however, is in Sweet Saturday Night, his late ‘60s examination of the Music Hall tradition, which is slightly ironic for someone whose reputation relied once relied on being at the cutting edge of contemporary pop culture.
Anyone who has stumbled across my London songs project will have noticed how MacInnes’ Sweet Saturday Night and the Music Hall tradition form an important part of the content. The same goes for Enlightenment! where Music Hall is indelibly linked to themes like Unity Theatre, Lionel Bart’s work, early British rock ‘n’ roll, through to Alan Klein and the Small Faces. MacInnes’ genuine affection and enthusiasm for the songs and performers of the Music Hall is infectious, but he makes a good case for the way they created a genuine working class art form.
In Enlightenment! there are a number of mentions of how Colin MacInnes was keen to see British pop songs reflect the times in which he lived. Coincidentally this phrase also crops up in this great Style Council clip, featuring a very droll Paul ‘n’ Mick. The group also performs one of its finest songs, Life At A Top People’s Health Farm, which very appropriately references a number old Music Hall and cockney pop classics, including Alan Klein’s What A Crazy World ...