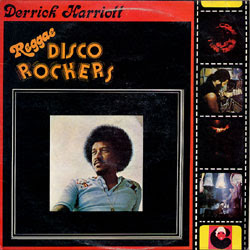 Long, long ago when car boot sales were a relatively new phenomenon and CDs were just coming in vinyl seekers had a field day. On one occasion I can remember picking up a 50p copy of Joe Gibbs’ Majestic Dub in mint condition, with really thick cardboard sleeve and the works. I knew my hip reference points, and about the African Dub series, so I was delighted. Eagerly anticipating some heavyweight dub excursions I put the needle on the record as soon as I got home, and suddenly out from my battered hi-fi oozed some squelchy synth straight off Donna Summer’s I Feel Love. I was rather confused.

Majestic Dub is a strange old record. While most of it is orthodox dub (if you’ll excuse what should be an oxymoron) there are definite disco elements here and there and generous use of bubbling synths. These days I would probably be desperate to hear more of those disco elements, and perversely have more recently come unstuck time and time again with the way ‘disco’ as a phrase is used in reggae music. I mean, for example, if you come across a Sly & Robbie record called Disco Dub you’d think it would be a bit, well, McFadden and Whitehead at least knowing what we know about Bits and Pieces, Boops, etc. but nah.

When I think of reggae meeting disco uptown I tend to think of Third World’s Now That We’ve Found Love, Inner Circle’s Everything Is Great, and that whole late ‘70s Island, Chris Blackwell, Alex Sadkin, Steve Stanley scene. It’s easy to forget that such ‘crossover’ sounds were a bit controversial at the time. Kris Needs was one of the few journalists in the late ‘70s enthusiastically writing about punk, reggae and disco all mixed in together, but even he in a Zigzag review of Sly Dunbar’s Sly, Wicked and Slick LP expressed caution about “the preoccupation with distilled disco”.

In an interview Kris did with Jacob Miller of Inner Circle, published in the April 1979 issue of Zigzag, there is considerable discussion about making reggae for the disco market, with reference to a Peter Tosh quote about not approving of disco music as “disco means to ‘get down’ which wasn’t a good thing”. And yet that same year Peter Tosh was in Byron Lee’s Dynamic Sounds studio with Sly, Robbie, Sticky, Mikey Chung making the Mystic Man LP for the Rolling Stones’ label with its centrepiece Buk-in-hamm Palace which is just about thee definitive disco reggae recording.

There is a time-honoured reggae tradition of reinterpreting the hits of the day, so it’s no surprise that long before Chris Blackwell’s masterplan was put into operation there were Jamaican takes on disco smashes. In 1975, for example, Byron Lee was redoing The Hustle and Disco Stomp. And I have to confess to being the type of person who gets irrationally excited at finding reggae disco versions of Silver Convention’s Fly Robin Fly. There’s a great one by Toney and the Sweet Bunch. Derrick Harriott did a fantastic version on his Reggae Disco Rockers LP, as did Harold Butler on his Gold Connection LP. There seems to be quite a lot of overlap between those two LPs in terms of personnel, and they were both released in the UK by Lloyd Charmers, interestingly enough.

Gold Connection, in particular, seems to be a record rated by devotees of Jamaican disco reggae who have looked beyond that great Soul Jazz Hustle compilation. I confess to being a massive fan, and like the fact that it’s only the odd track here and there that gets everything right. More knowledgeable people than me will point you in the direction of cuts like the Royal Rasses’ Unconventional People, Freak by Tapper Zukie, The Rebels’ Rhodesia, the wonderful It’s My House by Storm, and my particular favourite Hey Mister by Althea Fo(r)rest & Togetherness. And that is the Althea, yes, and quite possibly before Uptown Top Ranking on a cut she wrote with Derrick Harriott, who also produced it.

The overlap between disco and reggae was touched upon in Skimming Stones, an earlier edition of Your Heart Out, which looked at it more from a British perspective, starting with the Disco Dub Band and Mike Dorane’s Island-sponsored adventures with his Rockers and Movers labels which the more I think about it seem the blueprint for what Chris Blackwell did with Compass Point. Then there is Eddy Grant, who was once so popular he almost became invisible, but if you listen back to things like his original version of Walking On Sunshine they sound phenomenal in the way he mixed up elements. That track was perhaps his most out-and-out disco moment, but it’s hardly standard dancefloor fare.

Dennis Bovell may not have enjoyed Eddy Grant’s success, but he is rightly revered. I would still love to see a definitive database of his productions, but on the other hand it is fun finding them independently. So, for example, his production for his own Matumbi label of Guardian Angel’s Self-Service Love is a pretty special slice of disco reggae. And his steering of I-Roy (Roy Reid) down an explicitly disco path on Whap’n Bap’n is quite simply extraordinary.

Dennis Bovell’s engineer on a number of sessions was Mark Lusardi, who was another central character of that Skimming Stones edition of YHO. Mark worked on all sorts of sessions, some deep underground and some which were successful crossovers like Black Slate’s Amigo, a genuine success in charts and discos around the world. It could be argued that the UK reggae groups were able to provide perfect disco material because of versatility often acquired the hard way through years of experience doing session work and providing live support for all sorts of artists. The Reggae Regulars’ Where Is Jah?/Black Star Liner is another UK reggae 12” that springs to mind as an example of a record you’re likely to find featured on disco forums.

Among the pioneering recordings Mark Lusardi worked on was TW Funkmasters’ Love Money, a project of London reggae radio show presenter Tony Williams who used contacts among the reggae community to make an early electro track. Peter Shapiro in his disco history Turn The Beat Around cites the dub of Love Money as a huge club hit in New York and the track which woke Francois Kervorkian up to “the power dub effects had over the dance floor”. Peter mentions that Kervorkian’s own experiments with dub peaked on Snakecharmer, Jah Wobble and his group’s collaboration with Holger Czukay and The Edge. Ironically, going full circle, Mark Lusardi was a long-time colleague of Wobble’s and had worked with him and Czukay (and Jaki Liebezeit) previously on the How Much Are They? EP. Wobble has mentioned how “typically, Mark Lusardi was the unsung hero on that recording. He gave it a ‘tough’ disco sound, and some nice dub touches”.

Francois Kervorkian’s immortal disco reggae mixes include Jimmy Cliff’s Treat The Youths Right. His fellow champion of disco’s darker, dubbier side, Larry Levan, has similarly become more than legendary for his mixes. The ‘dubs’ of some of Gwen Guthrie’s Compass Point recordings spring to mind, like Peanut Butter, featuring Sly and Robbie etc. I think I’m right in saying that Gwen first worked with Sly and Robbie while recording with Peter Tosh in New York. She would certainly go on to feature on his classic Mystic Man set with its Buk-in-hamm Palace show stealer.