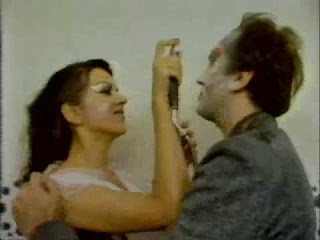 Zur by Boban Petrovic is a remarkable record. Released in 1981 in the former Yugoslavia, it’s one of the great blue-eyed soul/funk records. It’s undeniably very much in that immediate post-Off The Wall way of working, but it’s luxurious and strongly suggestive of the new pop gloss to come from Scritti Politti, say. Fashion’s Zeus B Held-produced Fabrique would be a good reference point, but then so would the rather later It Doesn’t Have To Be This Way by the Blow Monkeys or Shampoo Tears by Win.

Predictably, I stumbled across Zur through YouTube, having chanced upon a series of videos from the LP which seemed to string together and tell a story. Zur I believe means party and that’s certainly the theme of the video sequence, with Boban at the centre looking lupine in a louche lounge lizard kind of Klaus Nomi way. The setting and tone is delightfully decadent, and the feel is very much that of an early 1981 fantasy photo-shoot for The Face, complete with Blitz/Club For Heroes clientele on a weekend away in Belgrade. You expect Martin Degville to emerge at any moment, before remembering this is supposedly the austere Eastern Europe of old and nothing this risqué or outlandish was supposed to exist there.

Unlike Green Gartside in 1981 Boban Petrovic had been long steeped in black American funk and disco music. At a young age he’d started the group Zdravo who’d released some outstanding singles in the late ‘70s before Boban went solo. Zur was his first LP, but there was another one in 1984 (Zora) I believe. After that Boban seems to have published a hedonistic novel, moved to Cyprus, made billions in construction and financial trading, then moved to Marbella where he lived the jet-set party lifestyle, buying the local football team along the way, as you do.

One other record I know he was involved with was Perfektan dan za banana ribe by the Yugoslavian new wave outfit Talas or VIA Talas (that’s vocal-instrumental ensemble, which is a prefix used by a lot of Eastern Europe groups). The title of this 1983 LP translates as A Perfect Day For Bananafish, which will delight the Salinger fans among us who grew up on the notion of Holden Caulfield Universal. A lot of the LP is perky Martha & The Muffins pop, but there is some great stuff on there like the more dubby, disco infused post-punk of Gorke suze L.M. (Lady Mackbet).

A couple of tracks from Zur pop up on an unofficial collection, Idi, igraj!: Funk,soul, jazz funk & disco from ex-Yugoslavia 1969-1987, lovingly compiled by a certain DJ Funky Junkie. It’s an amazing insight into some of the music that was being made in Yugoslavia during that era, and more surprisingly there is very little overlap with my own fumbling and bumbling about in the music of the former Yu. I’d already been amazed at the soul/r’n’b influences that seemed so pronounced in old ‘60s recordings, like Nada Knezevic singing Garnet Mimms’ Cry Baby. But the names on this collection were new to me, with the exception of Zdenka Kovacicek who was one of the stars of the Anywhere Else But Here Today project singing Mi Volimo Soul.

Zdenka has a reputation for being the missing link between Yma Sumac and Janis Joplin, and a 1978 LP she made with the Igor Savin Big Band is rightly revered. Most of the LP is funky and bluesy, but there is one totally unexpected track, the amazing Elektra, where there is a real Moroder bubbling synth thing going on with Zdenka scat singing. Igor himself made his own Yu Disco Expres LP in 1979 which has some fantastic stuff on, and is a useful reminder of how the world over the disco explosion was underpinned by the precision playing of big bands and orchestras led by the likes of Igor Savin.

Of course the opposite end of the disco spectrum was where another sort of technology came into play, with the advent of electro, rap and the birth of hip hop, which caused considerable friction throughout the disco world. Yugoslavia was no exception, and there in the early ‘80s the Master Scratch Band were pioneers of electro, and their Degout EP, released in 1984, is wonderful. I gather that they didn’t have all the technology to hand that counterparts, say, in New York might have had, so necessity was very much the mother of invention, and I suspect that improvisational spirit is what makes the tracks seem so fresh now.

Before the Master Scratch Band EP was released the group had some success in the charts with Sizike, a project where they got three inexperienced singers to front a recording with rather spectacular success. It’s all very reminiscent of the Bananrama story, and indeed if that trio had recorded for Mute they would very likely have sounded like Sizike. The hit single was the electro pop wonder Don’t Stop, and it was a decidedly slinky affair. There was a fantastic accompanying LP too, but sadly the project was a one-off. I suspect this is not what people immediately think of when Balkan disco is mentioned.