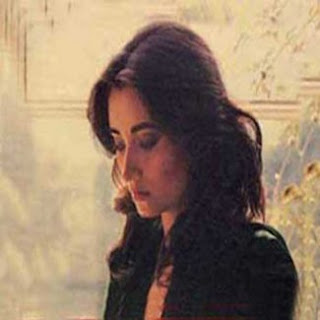 Disco Dhol Waja is a song from the 1986 Lollywood musical Qaidi. It’s a riotous number sung by Pakistan’s ‘melody queen’ Noor Jehan, composed by Nazir Ali, and Anjuman is the star dancing madly in the clip posted on YouTube. Stripped of its context, standing alone, it’s a high energy, highly entertaining romp, as camp as hell but great fun. Noor must have been nearly 60 when she sang this number, and she had been at the top of her profession as playback singer for years and years. Nazir Ali was himself a long established composer. And Anjuman was a highly successful actress throughout the 1980s. So, this film was pretty high profile, I guess, but there seems a certain mischief at work, not least with the deeply traditional dhol drum rigged up with electric lights and emitting syndrum sounds.

I have to confess I knew next-to-nothing about Pakistan’s Lahore-based film industry until the excellent folk at Finders Keepers released their The Sound of Wonder collection of tracks from the Lollywood vaults, which was a revelation. That set, covering the period 1973-1980, supplied plenty of clues about the characters involved in making these fantastic soundtracks, and almost inevitably YouTube revealed in its unique way a treasure trove of clips from old Pakistani films. The one thing that seemed to be missing was a site along the lines of Music From The Third Floor which would provide ready access to Lollywood soundtracks for those of us keen to explore in more detail, but life’s not perfect.

Recently I came across a fascinating article, written for Granta by the novelist Kamila Shamsie about growing up in Karichi in the late 1980s, and the relationship between pop music and the political climate in Pakistan. The turning point for the teenage Kamila seems to have been the arrival of the young pop group Vital Signs in 1987 with their strangely subversive synthpop song Dil Dil Pakistan. She refers, however, to the earlier buzz created by the success in 1981 of Disco Deewane by the Pakistan-born duo Nazia and Zoheb Hassan, and the unease the London-based pair’s natural glamour created among the religious right and allies of Pakistan’s military dictator, Zia ul-Haq: “These were the early days of Islamization, when the censors were confused about what was permissible. A few years later, the process of Islamization was sufficiently advanced that a video such as Disco Deewane would have no chance of airing. Although Nazia and Zoheb continued to release albums, the censorship laws and official attitudes towards pop meant they never gave concerts, received limited airtime on PTV, never released another video with the energy and sensuality of Disco Deewane, and were seen as a leftover from the days before Zia’s soulless rule sucked the life out of Pakistan’s youth culture.”

Kamila doesn’t mention Pakistan’s cinema industry in her article. But the Finders Keepers collection definitely gave the impression a golden age ended with the 1970s, and the little I’d read elsewhere had mentioned Lollywood’s decline in the 1980s as it tried to come to terms with censorship and restrictions on what was allowed. So, I must admit that while I wondered about what response the success of Disco Deewane may have triggered in Lollywood I wasn’t particularly hopeful that I would readily find much of interest. Experience, however, should have told me things are never that simple, and people will always find a way to entertain. So, inevitably, YouTube also hosts a nice store of 1980s disco-related clips from Lollywood movies. And while I happily concede these song and dance routines may well be carved from excruciatingly awful ‘exploitation’ films they are nevertheless often wonderful pieces of nonsense or high art in their own right, and I salute those involved for what they got away with.

So, for example, songs from the Biddu-produced Disco Deewane were used in the 1982 film Sangdil, including my particular favourite, the pop reggae flavoured Aao na. The dancer in the film is I believe Babra Sharif, doing her best in ‘difficult circumstances’. Barbra was one of the more glamorous and resilient stars of 1980s Pakistani cinema, and she appeared for example in a series of films which were Miss this or Miss that. Again, there are some disco gems on the soundtracks of these, such as Main chand khwab sajaloon from Miss Bangkok, sung by Naheed Akhter and composed by the great M. Ashraf, names that will be familiar to anyone who has The Sound of Wonder. Miss Colombia is another film in that series with a great M. Ashraf soundtrack.

Naheed Akhter was perhaps the only playback singer in Pakistan to rival Noor Jehan, and there seem to be plenty of examples of great 1980s recordings she made with a disco flavour. My own personal favourite is a number I know as Disco Deewane Mera Naam from the film Aik Din Bahu Ka. The music again is by M. Ashraf and in this particular clip the actress dancing is Bindiya. Another Nahid Akhtar/M. Ashraf disco number that’s made a great impression upon me is the glorious Mere dil main tera dil hai from the film Saathi. This time it’s Babra Sharif dancing.

Probably the best Bollywood disco number I’ve heard is Come Closer from the 1984 film Kasam Paida Karne Wale Ki, written by Bappi Lahiri and sung by Salma Agha. Salma was actually from Pakistan, but she sang on Bollywood soundtracks after she and her sister made an LP of Abba covers. She later moved back to Pakistan where she acted and sang for the Lollywood industry. Ruby was one of the films she sang on, and the disco number Humsa meri jaan is fantastic, with music by Amjad Bobby. The dancer is Sabitha Perera, who I believe was the only actress from Sri Lanka who gained popularity in Pakistani films in the 1980s. Another fantastic number from that film, sung by Naheed Akhter is Ye tanhai main aur tu.

Accompanying commentary on these clips refer to films being formulaic or flops, and I accept that. But the fact that people have gone to so much trouble to extract these dance numbers and upload them to YouTube indicates they have value. On a personal level, I have a real fondness for female ensemble disco workouts from these old Lollywood films. With Noor Jehan singing and the cast doing its thing, it’s impossible not to succumb, and I have to suggest again that there really does seem to be a sense of mischief at work on numbers like Nazir Ali’s Disco Jugni Kandi Ae or Disco Che Been Wajee. It’s as if they’re saying: “Right we can’t do this or wear that, so we’ll send the whole thing up and celebrate the glorious absurdity of where we are”. Perhaps.