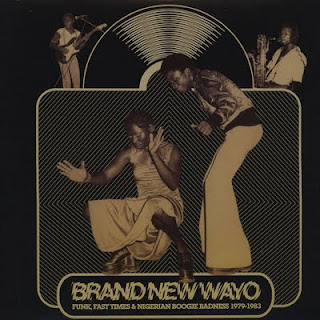 Brand New Wayo, the first release from Comb & Razor Sound, is a beautiful thing. It’s subtitled “Funk, Fast Times & Nigerian Boogie Badness 1979-1983”, or as compiler Uchenne Ikonne puts it: “We called it Disco”. And the CD edition comes clad in a sumptuous box which contains an 80-page beautifully put-together mock magazine in which Uchenne tells the story of the Nigerian recording industry during that ‘boom’ period, with some lovely vintage advertisements for authentic flavour. If more compact discs were issued with such flair, flamboyance and fun the sorry old recording industry just might find itself in a much healthier position. We might even spend more of the money we don't have on its physical products.

There are some fantastic tracks on Brand New Wayo. It’s impossible not to mention Kris Okotie’s Show Me Your Backside. The music is as glorious as the title, with a bubbling, unmistakably early ‘80s synth sound added to the it has to be said highly Off The Wall influenced funk flavourings. It’s a mix that makes Dizzy K. Falola’s Excuse Me Baby just as irresistible, and underlines yet again how much there is to learn about the music that is out there. There’s little chance of us running out of history for quite some time, unless we choose to limit our horizons.

It is the ladies on Brand New Wayo that steal the show. Joe Moks’ Boys And Girls and Oby Onyioha’s I Want To Feel your Love are both incredible tracks that in a perverse way work perfectly along side anything from Mambo Nassau by Lizzy Mercier Descloux or the Tom Tom Club, or perhaps something on Prelude or West End. Ironically there is probably the same mix of influences, just approached from a different perspective. And in the case of Tony Okoroji’s astonishing production on the Joe Moks track you have to remind yourself this was made a couple of years before Genius of Love.

In his excellent accompanying booklet Uchenne features a piece on Ladies of the Eighties which gives a brief overview of some of the singers who turned the tables on prevailing notions of a woman’s place in Nigerian pop music. It’s a theme he had explored earlier on his legendary blog With Comb and Razor in a post I would cite as one of the best pieces of writing on pop music ever. This particular piece, from November 2007, was entitled ‘On: The Quincy Jones of Nigeria, woman singers and the London Era of Nigerian music’, and it still makes my head spin with its elegance and the abundance of information it contains. In short, it is an article that opens up so many new vistas it’s intoxicating.

The main thrust of the article was about becoming aware of the producer’s role within Nigerian disco/pop sounds, with a specific focus on the work of Lemmy Jackson: “Jackson's rep as ‘the man with the magic fingers’ took off in 1981, a banner year in which three landmark albums bore his production credit: Christy Essien-Igbokwe's Ever Liked My Person?, I Want To Feel Your Love, by Oby Onyioha, and under his own name, Tonight.” The piece had a great tangential theme about how in the early ‘80s some Nigerian recordings were overdubbed and mixed in London, where there were plenty of connections via Osibisa, The Funkees, etc. Appropriately for YHO readers among the musicians featured on some of these sessions was Annie Whitehead. And, even better, the featured vocalist on Jackson own LP, Tonight, was Dan-I of Monkey Chop fame, who may be the only person about whom you can get away with using the names Linton Kwesi Johnson and Trevor Horn in the same sentence.

Mention of Christy Essien-Igbokwe and Oby Onyioha allows Uchenne to explain the impact female singers had on Nigerian pop in the early ‘80s: “A score of educated modern ladies holding their heads high and singing the liberated songs of the New Woman--and some of them even wearing trousers as they did it! After the decidedly austere presentation of the folk singers, to have a woman like Oby Onyioha wearing red lipstick and a perm, cooing I Want To Feel Your Love and exhorting her sisters to Enjoy Your Life while decadent strings swooped around her was a deliciously radical change of pace, forerunning a substantial cultural shift.” Another singer mentioned is the elusive Theadora Isudu, whose second LP was actually recorded in the US and opens with the absolute classic It’s Easy. If there is a degree of caution in saying that it will be because you can’t exactly walk into a record shop and easily buy the record, which is criminal when you hear something as wonderful as Ada, which at the risk of being repetitive really has a touch of the Lizzy Mercier Descloux about it.

The great thing about the With Comb and Razor site is that it challenged some of my own ideas about Nigerian music. I guess like a lot of people I’d trundled along, knowing a bit of Fela and king Sunny Ade, gradually learning more about the sound of funky Lagos in the ‘70s via labels like Strut, and overdosing on highlife and frenetic dancefloor sounds. To then come across something like Christy Essien Igbokwe singing Ever Liked My Person? and sounding suspiciously Tammy Wynette-esque or the mix of country and funk on Kris Okotie’s I Need Someone was decidedly disorientating, which is actually a good thing.

The other website I would visit frequently to get a fill of African sounds was the excellent Voodoo Funk, where its host New York DJ Frank Gossner would detail his adventures travels in West Africa in search of abandoned vinyl. The site remains an invaluable resource offering some superb mixtapes collated from the records Frank has found. Among the mixtapes are a number of Nigerian 'disco' sets which are glorious, and it's fascinating to see the evolution from an almost apologetic tone for posting some of this music to a growing realisation that people are desperate to hear more. And we are! Last year Frank compiled some of these sounds for the Lagos Disco Inferno set which is another absolutely essential collection, where again the show is stolen by Doris Ebong's magnificent Boogie Trip ...