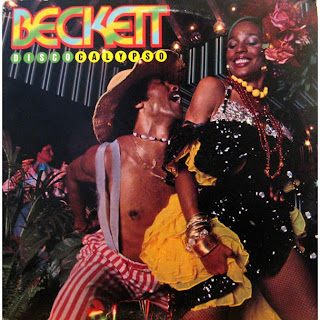 It’s one of the more dependable devices in crime fiction: the hiding of something specific in the middle of the very general. And so in much the same way how many people would immediately recognise Ralph MacDonald’s Calypso Breakdown? Yet many millions of people have owned it as part of the soundtrack to Saturday Night Fever. I wonder how many who heard that track would go on to investigate other works by the New York percussionist?

I like the idea of a casual disco fan stumbling upon Ralph’s 1978 LP The Path, and really getting into its conceptual side as it traces a journey, spiritually and musically, from Africa through the Caribbean to New York. It’s a hell of a record, and features a heavyweight cast including Chuck Rainey, Bob James, Gwen Guthrie, Miriam Makeba and Grover Washington. Its follow-up, the excellent Counterpoint, was rather more dancefloor-friendly with the track Discolypso giving an indication of the musical area it was having its fun in.

Another Hollywood blockbuster that had its disco calypso moment was The Deep, which featured Beckett, the soca star from St Vincent, on an irresistible track arranged by close collaborator Frankie McIntosh. I would love to be able to say my life was changed by Calypso Disco when I saw the film as a kid, but I confess Jacqueline Bisset made rather more of an impression upon me. Beckett got to release an accompanying LP on Casablanca, one of my favourite labels which released a host of classic disco sides, most notably the remarkable string of Donna Summer hits. It often confounded expectations though, with for example its Wildflowers series of recordings from New York’s Loft jazz scene which I bet has caught out a few disco neophytes who think they know their David Mancuso history.

I have to admit I am not familiar with Beckett’s other recordings, and I would willingly concede that soca is bit of a weak spot for me. One record I did stumble across which made me sit up and pay attention is a collection called Rebel Soca, which has an astonishing track on it by Safi Abdullah called Afrika Is Burning. Ostensibly it’s an attack on disco hedonism: “Under screams of a boiling overdose systematically controlled by idiots of the White House with twisted grins and stale peanuts. Africa is burning, and the Black Man is doing the Freak ”. It goes on to point a finger at party-goers and their “tight jeans and Elton John sunglasses, Pierre Cardin sneakers and a bag of smoke.” While the sermon is delivered in the finest Gil Scott-Heron tradition, ironically the music which is a glorious mix of reggae, calypso, funk, highlife and much more makes it a pretty unique disco classic itself. There seems to be ridiculously little out there about or by Safi Abdullah beyond an old compilation.

There is a lot of interest in what happened when disco music met Caribbean sounds, and there are plenty of people better qualified than me to write about ‘tropical disco’. But one thing that does particularly appeal is that any ‘tropical disco’ collection or mix is likely to include tracks from beyond the Caribbean itself. The term ‘disco lypso’ itself has been adopted by Mandrill and by Bunny Mack, and used for a compilation put out by Trans Air, a label that is carving out a nice niche in salvaging lost Caribbean funk. And you’ll find ‘tropical disco’ sounds in various locations. To give a great example, Harry Mosco was leader of Nigerian afro rock outfit The Funkees who moved to London to try their luck following the success of Osibisa (and if Sunshine Day isn’t the most glorious example of ‘tropical disco’ I’ll retire hurt!). Harry went on to make some solo recordings for the Nigerian market, including the excellent early ‘80s LP Sugar Cane Baby which had a glorious Caribbean infused title track.

Many writers have tried to untangle the roots of disco, but have only succeeded in tying themselves up in knots with their references to salsa, merengue (is that an excuse to mention Les Chicas del Can?), reggae, boogaloo, samba, gospel, African rhythms and Soul Makossa. I came across a fascinating piece by Alastair Bird in The Caribbean Review of Books, which was prompted by the re-release of Eddie Hooper’s Pass It On and Tomorrow’s Sun, in which he acknowledges: “The problem with trying to impose an elegantly simple, chronologically reciprocating, and intercultural global narrative on the evolution of musical genres such as disco and soca is that the narrative never quite fits. Contemporary influences are multiple, and the dialogue is gleefully messy; it’s rarely possible to identify where one wave of influence concludes and another begins.”

If you take Caribbean sounds and ‘tropical disco’ in their loosest senses then it’s fascinating to see how influences have pinged back and forth. Even the most casual of music fans will be able to identify songs with a ‘tropical disco’ flavour: Boney M, Goombay Dance Band, and perhaps Lobo’s Caribbean Disco Show which was memorably interpreted by Legs & Co. Then there are the projects of inveterate cultural magpies Daniel Vangarde and Jean Kluger, from Le Monde Fabuleux Des Yamasuki to Black Blood to La Compagnie Creole via the Gibson Brothers and Ottawan. While disco snobs may be snooty about the popular appeal of songs like the Gibson Brothers’ Cuba and Ottawan’s D.I.S.C.O. there is no denying the pleasure they’ve brought to millions around the world, and there is a very strong case for the subversive way in which Vangarde and Kluger made Caribbean exiles famous with a mad miscegenation of musical styles which has made its presence felt worldwide, from Josef K to Bollywood.

Vangarde, in particular, is one of my favourite pop figures. Among other things he is said to have been responsible for Chic working with Sheila & B Devotion and for introducing Wally Badarou to Chris Blackwell when the Island patron was putting together his Compass Point team personnel. The whole Compass Point phenomenon was a literal case of disco and Caribbean cultures colliding. Ironically, however, it is a struggle to think of examples where the local funky Nassau sound impacted on what was being created, except perhaps if you count Monte Browne, a former guitarist with T-Connection, working on the Tom Tom Club LP. And then again T-Connection had a major impact on the development of disco with Do What You Wanna Do and other classics.