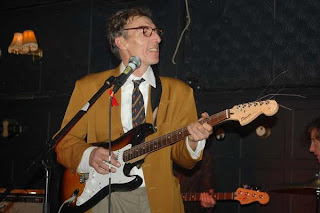 We Come As Aliens: Vic Godard & Subway Sect
If you’ve heard the news in the Post Office queues, the remarks in Primark, the moaning in Morrisons, the grumbling in Greggs, the strops in the charity shops, the anger in Asda’s aisles, the sound and the fury in Poundland, then you’ll know there’s trouble brewing. Who knows what ‘difficult decision’ will push people over the edge, but a revolution against everyday life is on the cards as disbelief turns to mischief. And when the more mature malcontents do go on the march then they might just have found an anthem in Vic Godard’s Take Over, from his new LP We Come As Aliens.
I never really had Vic down as a Pete Seeger figure, but if you were that way inclined We Come As Aliens could at times be interpreted as a state-of-the-nation address. Take The Same Plan and use Vic’s theme of the ‘modernisation’ of the Royal Mail as a metaphor for the world today, and you’ll see what I mean. The idiots in charge of everything, the careerists’ calamitous decisions, the cheap compromises, the relentless rebranding, and the ‘progress’ that is anything but and just makes daily life that much more difficult. “Time for you diamonds in the rough to come out front and strut your stuff. No point in skulkin’ in doorways sulkin’. Let’s take over together people now,” sings Vic, the old contemptible, with a rallying cry and a twinkle in his eye.
There are some cracking lines on We Come As Aliens, but you’d expect that. Vic’s curmudgeonly Cockney cynic persona is at times pure Music Hall, and the spirit of Gus Elen, Harry Champion, et al, is alive and kicking, thank god. There’s no going hither and playing the mystic on this record, but the art of writing caustic couplets capturing the spirit of the age is not to be underestimated. And when there are some nice popular culture references (Lloyd Johnson, Peter Mandelson and Blakey, for example) and some rousing choruses all us aliens up in the Gallery should stand up and wave our caps in support.
Some of the best lines on We Come As Aliens are about the baffling old world of showbiz, with Vic addressing the old conundrum of why we keep on doing what we do, with some neat self-deprecating touches. “More of us on chorus than in front of us”, perhaps, but we’ll have a wail and a moan nevertheless, and then go ‘ome and shake our heads in despair at what’s on the TV and the radio. The ‘autobiographical ‘ stuff on We Come As Aliens continues on from some of the great tracks on Sansend eight years ago, like Go Against The Grain and The Writers Slumped, but in a way WCAA is the culmination of Vic’s progress since then. It’s just taken such an age to reach us.
Musically, WCAA is often perversely primitive and a right old racket, but it’s exactly what’s needed to stick two fingers up at the dreary old music scene. Beyond the punky clatter the essential template is Vic’s characteristic take on Northern Soul in all its guises, which means a collection of glorious choruses as catchy as an old Racey or Foundations track you find yourself inadvertently howling along to when it’s played on the Gold oldies station all the aliens have deserted to in protest against what those ‘in charge’ have done to ‘modernise’ Radio Two, the station Vic once dreamed of being played on. The LP closes with Music of a Werewolf which musically is closer to the Sansend sound. Its passing reference to Theodore Gericault for some reason reminds me of two old boys I heard chatting in a Poundland queue recently about whether it was Eric Delaney who was the first guy to play two drum kits. The connection is I had to look both up, but I like to learn something.
A word should be said for Overground, who have issued WCAA on CD (though vinyl editions are available through Vic’s Gnu Inc.). I know little about Overground, other than that they’ve been going for years and I have a stack of their releases, ancient and modern. They may not have the kudos and clout of a Domino, but I have more time for them. Among my pile of Overground CDs is Strange Kicks by Alternative TV on which Mark Perry sings: “The ancient rebels, so they say, will live to fight another day”. Up the revolution!
Posted by Yr Heartout at 15:22