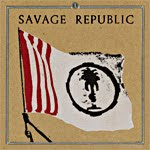 Anywhere Else But Here Today closes its Greek sequence with a couple of numbers from Mikis Theodorakis’ The Ballad of Mauthausen song cycle. There is live footage of Mikis’ muse Maria Farantouri singing Asma Asmaton (Song of Songs), which portrays the anguish of a Jewish prisoner on learning that the women he loves has just been sent to the gas chamber. The same song closes our Greek Sounds mixtape, which you can download here. It really is one of the most moving compositions/performances ever.
There is another clip of Maria singing O Antonio/O Andonis from the same song cycle. This is the Theodorakis composition that the LA group Savage Republic did a cover of fairly early on in its career. It is also something I have to confess I came across only recently, but I am a very late convert to the Savage People’s Democratic Republic. For some bizarre reason I had Savage Republic all wrong, and assumed they were deadly dull Front 242/Swans pummeling industrial outfit. It’s been fun catching up, though. I have become particularly fond of the all-instrumental affair Ceremonial and the 1988 set Jamahiriya Democratique et Populaire. The latter features their covers of Theodorakis’ Pios Den Mila Yia Ti Lambri and ATV’s ironic/non-ironic anthem Viva La Rock ‘n’ Roll.
Now the idea of a group covering that ATV track in 1988 would have been enough to make me fall totally in love, but I don’t remember anyone making that front page news. Actually THAT Alternative TV is probably the closest comparison needed for Savage Republic if you think of Still Life or Splitting In Two or Lost In Room as blueprints. Indeed Savage Republic seems to have had its ‘Good Missionaries’ moments with wonderful use of strong Arabic influences, and more generally a mix of lyrical themes and imagery that reaches out far beyond the limited ‘alternative’ rock reference points, which just might have been a reason why the media didn’t get behind the group in the way it did, say, the Pixies or Dinosaur Jr.
If, by chance, I am not the only one to have been intimate with the works of Savage Republic then it is worth mentioning the excellent LTM label has an archival collection in its catalogue. I know opinions are divided about it, but I also strongly recommend the ambitious 2007 comeback, 1938. Again, its titles and themes are way beyond the reach of your average outfit, with the references to Marshal Tito and Breslau, and plenty of eastern musical flavours that contribute to a soundtrack that has the gravitas to match the portentous title. It’s a record that repays repeated listening. And it's still very much Savage Republic ...
Posted by Yr Heartout at 08:09