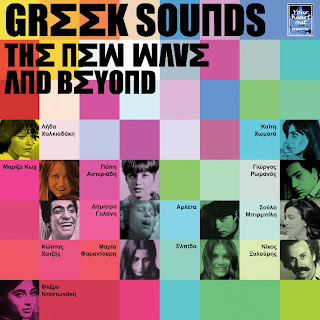 Tragoudia is the latest edition of Your Heart Out, and it can be downloaded here. It’s subtitled Adventures in Greek Music, though things are never quite that straight forward. Tragoudia is accompanied by an exclusive mixtape, entitled Greek Sounds: The New Wave And Beyond, which can be downloaded for free here. It takes as its starting point what in Greek music is known as new wave or ‘neo kyma’. This was a form of pop that in the mid-to-late ‘60s mixed traditional Greek folk song with other elements such as French chanson/pop. The recordings were often acoustic, stark and wonderfully romantic. From the new wave the mixtape wanders into wilder psychedelic territory and also takes in some astonishing performances of songs (tragoudia) by the great composers like Theodorakis and Hadjidakis. Several of the artists are featured in the Greek sequences at Anywhere Else But Here Today, the pop music project where we seek out buried treasure from around the world. With thanks to Per-Christian Hille for another great piece of cover art.
Posted by Yr Heartout at 07:27