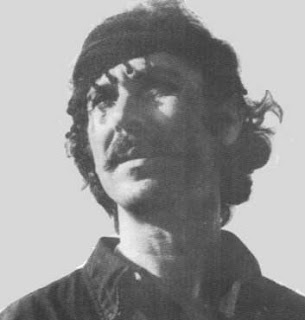 One of the highlights of our Greek Sounds mixtape (download it here) is Nikos Xylouris’ contribution which starts with a demented and bizzarely Velvets/Venus In Furs swirling, sawing sound that has more to do with Cretan folk tradition than downtown NYC and is all the more powerful for it. Nikos’ voice is rough and rasping, very intense, and quite intimidating in a beautiful way.
The accompanying edition of Your Heart Out, Tragoudia, which can be downloaded for free here, refers to Nikos being one of the outspoken opponents of the military junta in Greece (1967-1974), and mentions the story of how during the student protests of 1973 Xylouris is said to have climbed the gates of the Athens Poly with his lyra to sing a rallying traditional Cretan revolutionary song, Pote Tha Kanei Xasteria (When Will the Sky Be Clear Again). This was a song featured on the Rizitika LP Xylouris had made with Giannis Markopoulos in 1971, drawing on their Cretan roots by singing ancient rebel songs and laments, which were easily recognised as allegorical protests against current struggles by opponents of the military dictatorship, and as such became a vital part of the opposition’s soundtrack.
Markopoulos is also featured in fantastic fashion as part of our Greek sequence at Anywhere Else But Here Today in a clip taken from the Jules Dassin & Melina Mercouri film The Rehearsal which was made to draw attention around the world to what was happening in Greece under the military regime, with specific reference to the November 1973 Athens Poly uprising. It was filmed in New York, which is ironic as Dassin was once unofficially exiled from the US during the McCarthy era. By the time the film was finished the junta had been ousted, so it never really had a chance to become known like some of Dassin’s other classics, like Night And The City, Never On Sunday, Topkapi, Thieves Highway, etc. It may still be available on YouTube though ...
If Markopoulos’ name seems familiar then it’s a good chance it may be for his soundtrack for the BBC series Who Pays The Ferryman? This was screened in the late ‘70s and the theme tune caught the public’s imagination. As far as I know it’s not been released on DVD in the UK. Returning to Rizitika, and his recording with Xylouris, this was the song Nikos sang while astride the gates of the Athens Poly ...