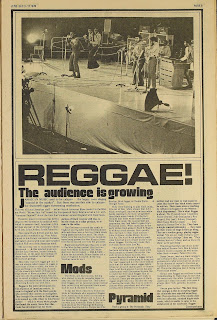 A Belief in Mischief is the new edition of Your Heart Out which can be downloaded here as a pdf, free for all. It started out as a meditation on sacred texts, and ended up as a celebration of irregulars, visionaries, mischief makers, and people who just don't get written about enough. This edition draws heavily on the archive of the 'underground newspaper' International Times. This archive is an invaluable resource, and in terms of content it destroys various myths about pop culture journalism.
One of many articles that has caught my eye is one on reggae from a December 1970 edition. It ties in with Horace Ove's Reggae film, and it's quite a combative, confrontational piece. What is intriguing is that there doesn't seem to be any credit for the writer. It's tempting to mention Penny Reel, because of his IT connections, but I suspect he wasn't involved with the paper until 1973ish.
It's interesting to see a mention for Mrs King of Stamford Hill in terms of being a pioneer of releasing reggae records independently in the UK and putting them in with your groceries. Only recently John Eden's Uncarved site ran Malcolm Imrie's account of the 'secret history' of the R&B record shop and label, based in Stamford Hill and run by Rita & Bennie Isen. The R&B label and its various offshoots (such as Ska Beat) were extremely important in putting out ska and early reggae singles in the UK. Ironically among the first ska singles I bought (from a ramshackle shop near Sidcup station) in 1979 were on R&B (Lee Perry's Mad Head), and something by Clive and Gloria on Ska Beat.
I would suggest you could have hours of fun seeking out old R&B and Ska Beat releases. This Laurel Aitken number has particularly caught my attention. Oddly I've just remembered Laurel Aitken and that old record shack pop up in a short story I wrote some time ago.
Posted by Yr Heartout at 01:22