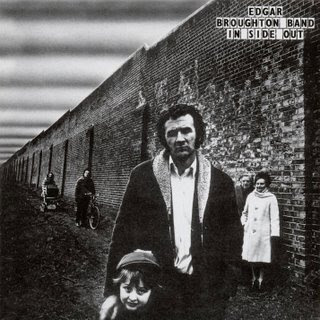 A Belief in Mischief is the new edition of Your Heart Out which can be downloaded here as a pdf, free for all. It started out as a meditation on sacred texts, and ended up as a celebration of irregulars, visionaries, mischief makers, and people who just don't get written about enough. The Edgar Broughton Band are among those mentioned, and this is very much in a 'confessional' context as I freely admit I got the EBB completely wrong. For so many years I'd dismissed them as archetypal heads-down no-nonsense blues rockers and I must admit I'd not read anything much to make me think differently except for the occasional mention of them as part of the Notting Hill commune, free festivals, freak scene. But then I heard their 'hit' Apache Dropout where the good Captain & the Magic Band got it together with the Shadows with considerable style and wit. I was prompted to investigate further. And couldn't believe what I found.
The early raw EBB is fantastic on the first couple of LPs, Wasa Wasa and Sing Brother Sing, and I was surprised to find myself thinking of Robert Lloyd and the Prefects/Nightingales when hearing tracks like Why Can't Somebody Love Me? But it was a couple of the later LPs that really struck me. The cover of Inside Out is fantastic and the strikingly stark social realist theme is matched by some of the content on songs like They Took It Away and Homes Fit For Heroes.
I have grown to like the next LP, Oora, even more, and the musical setting here often seems to be approaching a glorious melodic mod soul-storm, infused with a sense of disillusionment and confusion. It really is fantastic, and not at all what I would have expected - which is a useful reminder never to assume anything. The presence of Madeline Bell and Doris Troy on backing vocals gives a useful clue. And there are a few exceptional tracks, including Things On My Mind and Eviction.
It's quite a nice feeling to be able to put down in black and white an acknowledgement that you've got something completely wrong, so while I'm trying to make amends I would like to mention Edgar Broughton's current activities. His site, in particular, is well worth a visit, and his blog makes for a great read. It has to be said Edgar's insightful commentary on the world around us adds additional weight to the political content of some of his early '70s recordings, such as this ...
Posted by Yr Heartout at 01:22