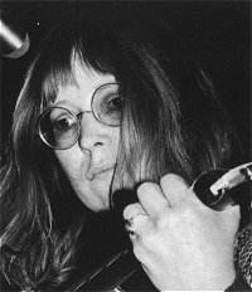 A Belief in Mischief is the new edition of Your Heart Out which can be downloaded here as a pdf, free for all. It started out as a meditation on sacred texts, and ended up as a celebration of irregulars, visionaries, mischief makers, and people who just don't get written about enough. Among those mentioned is Jo Ann Kelly, the astonishing blues singer and guitarist who emerged from the south London delta in the '60s and stayed very much on what she described as the esoteric side of the blues scene. Like Val Wilmer, Jo Ann and her brother Dave had their interest in blues music fuelled by the Swing Shop in Streatham, and it was Tony McPhee who first introduced her to the recordings of Memphis Minnie, to which Jo Anne's performances were often compared.
I don't know how well known Jo Ann's recordings are. I am conscious that there are several I've not heard. But she fascinates me. She didn't take an easy path. And while there may be a few raised eyebrows at the notion of a south Londoner becoming quite so immersed in the country blues tradition there can be no doubt about the extraordinary power and beauty which drove her performances. I guess connections/recordings with John Fahey give her legacy a stamp of approval which might help people sit up and take notice.
Jo Ann's contributions to the Immediate series of modern blues LPs was where I first came across her music. And it was in Val Wilmer's Mama Told Me There'd Be Days Like This that I first read about Jo Ann. While some of her purists' blues works are wonderful, like her recording of Oh Death with T.S. McPhee, I do find myself very much drawn to the occasions where she sings a little outside of the blues' parameters. For example, she helped out the group Tramp (featuring some moonlighting Fleetwood Mac people) with some vocals on the title track of the Put A Record On LP, and it's an incredibly beautiful performance, right up there with the best blue-eyed soul moments. Beggar By Your Side from the same (Spark) LP is wonderful, too.
Jo Ann sadly died in 1990. I wonder if she were still active today whether she would be busy with all sorts of intriguing collaborations, given a resurgence of interest in roots music and English visionaries of different sorts. Who knows? This beautiful piece of film is of Jo Ann singing one of her greatest songs in a Bristol club, when she really did have little time left.
Posted by Yr Heartout at 00:54