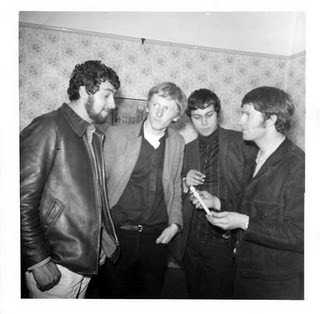 A Belief in Mischief is the new edition of Your Heart Out which can be downloaded here as a pdf, free for all. It started out as a meditation on sacred texts, and ended up as a celebration of irregulars, visionaries, mischief makers, and people who just don't get written about enough. One of the people featured is Norman Jopling. He was the first person to rave about the Rolling Stones in print. And Dave Godin, on a number of occasions, took particular care to acknowledge the importance of Norman writing about rhythm & blues music in Record Mirror in the early '60s. Norman also plays a central role in the early part of Neil Rushton's Northern Soul Stories. That book contains some great anecdotes from the time when Norman and Peter Meaden ran a publishing company called New Wave Music. The first new act they signed up was a wonderful group called The Peep Show, and a couple of singles appeared on Polydor. They really are wonderful things, with more of a folk sound than most of the other outfits on the fringes of the psychedelic scene and some wonderfully unusual lyrical themes. There are a couple of wonderful Peep Show compilations around, and they are fantastic. If you are interested in Norman's story I would thoroughly recommend investigating the back pages of Morning magazine, which is beautifully designed and put together by Iker Spozio, whose artwork you might recognise from sources such as records by the very great Colleen (who also helps to make Morning magical).
Posted by Yr Heartout at 01:54