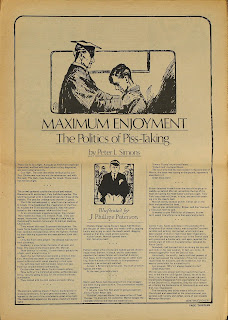 A Belief in Mischief is the new edition of Your Heart Out which can be downloaded here as a pdf, free for all. It started out as a meditation on sacred texts, and ended up as a celebration of irregulars, visionaries, mischief makers, and people who just don't get written about enough. Now I am very much in the camp of there being no beginnings or endings, just peaks and troughs. So, speaking of 'sacred texts', some of us of a certain age will have vivid memories of an issue of the NME from April 1979 which heralded a resurgence of interest in matters of a modernist nature. The mod special featured Penny Reel's tale, The Young Mod's Forgotten Story, which many of us kids studied in absurd detail. Over 30 years on I was just as excited to discover another story in a July 1974 issue of International Times where writing under the (reel) name of Peter L. Simons the great reggae journalist included some of the same characters (Lennie Tyler, Beardy Pegley, Charlie Steiger) in another story of east London school days in the early '60s.
Of course it is one of the tragedies of our age that Penny Reel hasn't written enough, and a book of his 'mod memories' would be a wonderful thing. We do, at least, have his excellent book, Deep Down, a short story about Dennis Brown. And I'm sure I'm not alone in eternally associating certain songs with that 1979 Penny Reel piece, like Chuck Jackson's I Don't Want To Cry and this ...
Posted by Yr Heartout at 00:12