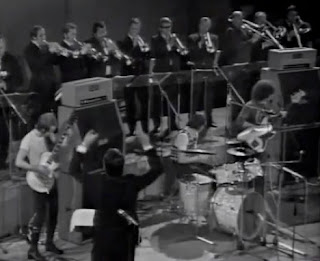 Rainsongs and Painsongs is the new edition of YHO which can be downloaded as a pdf here, free for all. It is at heart a celebration of Julie Tippetts' work, very much inspired by her collaboration with Martin Archer on Tales of FiNiN which is undoubtedly the most rewarding record of recent times.
Naturally, being YHO there are a number of diversions and detours along the way. So, for example, mention of Julie's incredibly moving song Czechoslovakia allows an ideal opportunity to ponder upon the Prague Spring and its aftermath in relation to some of the fantastic produced there during that period. A perfect example of this is Slunecny hrob by the group Blue Effect which is just so beautiful and always feels like a prayer to me.
Of course after the Soviet invasion life will have been more difficult for 'progressive' groups, but I don't know for sure if this influenced Blue Effect to become an instrumental outfit. It may have happened, anyway. Plenty of their Western counterparts moved in a similar 'jazz rock' direction, as well. And plenty of what Blue Effect did in the early '70s bears comparison with what was happening with Soft Machine and those acts who threw together heavy guitars and organ with jazz horn sections. The 1970 LP Coniunctio, which Blue Effect recorded with Prague's Jazz Q, is fantastic. Jazz Q at the time featured the flutist Jiri Stivin, who made some pretty incredible records of his own in the '70s too. While I am far from an expert on his work I would particularly recommend the 1976 LP Zodiac which features the Kuhn Mixed Chorus and the Talich Quartet.
With a little of pressure Blue Effect recorded for a while as Modry Efekt, a name that might be familiar to those that might be familiar to those that have studied the infamous and invaluable Nurse With Wound list. In this guise there was a great LP recorded in 1971 with the Czechoslovakian Radio Jazz Orchestra, Nová Syntéza, which will appeal enormously if you love CCS or Septober Energy by Keith Tippett's Centipede.
There is actually some great footage on YouTube of Blue Effect or Modry Efekt performing in 1971 with a small orchestra, and it's wonderful. This will appeal to anyone with a passion for what was happening with the blending of the UK's progressive jazz and rock performers at the time.
Posted by Yr Heartout at 00:28