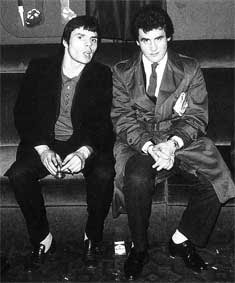 A Belief in Mischief is the new edition of Your Heart Out which can be downloaded here as a pdf, free for all. It started out as a meditation on sacred texts, and ended up as a celebration of irregulars, visionaries, mischief makers, and people who just don't get written about enough. One of the texts mentioned in passing is Peter York's Style Wars. I don't think I would call it one of my sacred texts, but it contains some very smart writing, and many of York's observations are very astute. He, for example, recognised at a very early point that Danny Baker was destined to become a national treasure. And there are some neat accounts of events such as the infamous Sex Pistols Jubilee boat trip and a very good piece on Munich Disco. I guess this book has fallen out of fashion, ironically, because of the success Peter had with the whole Sloane Rangers thing.
I don't know if I would agree with Peter about many things, and I have absolutely no concept of what music he might go home and listen to nowadays. Does that matter? So many 'writers' with 'good taste' churn out such dull work, after all. But Style Wars is very much worth seeking out, if you steer clear of the 'tribes' profiled. The pop parts are good, and York includes one of the most perceptive and sympathetic pieces on the 1979 mod thing.
I'll let you into a little secret. I was interviewed about the '79 mod thing, ooh quite some time ago now, for a book that was obviously going to be pretty high profile. During the course of the interview I thought some pretty important ground was covered, and I had a horrible suspicion that some of the best bits just would not fit in this particular book. So I scribbled my thoughts down while they were still fresh in my mind, and those thoughts ended up up in what became the first edition of Your Heart Out.
If there is one thing that stayed with me from being 15 and exploring the modernists' world for the very first time it is the dizzying thrill of learning about something new, and realising that something 'new' doesn't necessarily have to be something 'now'. And let's face it, discovering the music of The Creation, for example, didn't ever preclude listening to the Fire Engines or the Peech Boys. It was, and is, very much part of the same thing.
Posted by Yr Heartout at 00:58