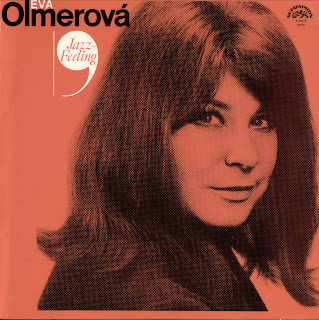 Rainsongs and Painsongs is the new edition of YHO which can be downloaded as a pdf here, free for all. It is at heart a celebration of Julie Tippetts' work, very much inspired by her collaboration with Martin Archer on Tales of FiNiN which is undoubtedly the most rewarding record of recent times.
Julie's short spell as an international pop icon had a dramatic impact around the world, and it is interesting to note those whom she seems to have influenced such as the excellent Josipa Lisac in Yugoslavia. In Czechoslovakia I think it's fair to suggest that Julie's recordings with Brian Auger and the Trinity and their 1968 visit to the country had an impact on singers like the wonderful Marta Kubisova.
Another Czech singer that's really had an impact on me is the jazz/blues performer Eva Olmerova. There is a great documentary about her turbulent life available through Radio Prague, which is really compelling and moving. There are some great clips of her in performance on YouTube, such as the the very 'noir' 1971 film for Cerna kara. There are some great clips, too, of Eva singing numbers from her debut 1968 LP Jazz Feeling, which featured Jiri Stivin.
I like the fact that Eva was prepared to have a go at any style of music as long as she could exploit the passion in the song, and she did some spectacularly deep country meets gospel numbers. But this is the one I keep coming back to ...
Posted by Yr Heartout at 00:14