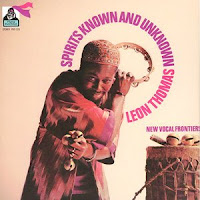 One of the main themes of the fifth issue of Your Heart Out was about hearing jazz on the radio, via the shows Gilles Peterson hosted on Radio London. I think it's one of the most important aspects of the whole pop experience. That moment when you first hear something on the radio, and think wow! And there were tracks that Gilles played in the '80s which made me stop whatever I was doing, and just ... One of these occasions was hearing Pharoah Sanders' The Creator Has A Masterplan, with Leon Thomas singing. I don't think it was the full version, but it was enough to make my head spin.
Then later I would hear Louis Armstrong with Leon Thomas performing The Creator Has A Masterplan. And that made my heart melt. The concept was so perfect. This great figure, this legend, on one of his final recordings, performs this beautiful spiritual song. It gets me every time, and I'm not a religious person in any formal sense, but you hear this and ...
Another of the allied themes was to do with the jazz dance scene, and a bit of gentle teasing about Factory Records stereotypes. I know Tony Wilson loved to play games, and you could take many of his pronouncements with a pinch of salt. Nevertheless, there are those that persist in quoting the guy's thoughts on jazz, so with a doff of the beret let's point you in the direction of Factory recording artists the Jazz Defektors, who completed their great lost LP with a little help from Paul Weller. Ah what a wonderful world ...
Posted by Yr Heartout at 15:55