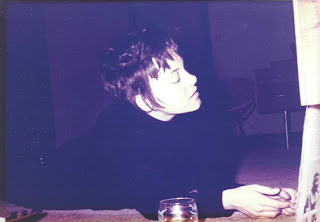 Ghosts of Midnight is the latest edition of Your Heart Out which can be downloaded here free for all as a pdf. It is an affectionate tribute to the 1950s jazz label Bethlehem and some of its voices. Among those voices were those of the Pat Moran Quartet, who recorded a couple of LPs for the label in the mid-'50s, featuring some lovely intricate vocal excursions which hold suggestions of the style that would be popular a decade or so later with the Mamas & Papas, Spanky & Our Gang, etc. Taking the lead on some tracks, like the exquisite Sunday Kind of Love, is Bev Kelly, one of my very favourite jazz singers. Pianist Pat Moran would next lead a new trio, which featured the legendary Scott LaFaro on bass. This line-up recorded a fantastic set for Audio Fidelity in 1957, which demonstrated a wonderful rapport between Scott and Pat. Indeed Scott is on record as saying the sessions with Pat Moran were his favourite recordings. The trio also made an LP backing Bev Kelly, which is an absolute must-have, and its got so many wonderful performances on. In fact, all the Pat Moran 1950s recordings are easy enough to buy in digital form and are great value.
Scott LaFaro died tragically young, though recordings with Bill Evans and Ornette Coleman mean he is rightly revered. There was, for example, a very entertaining BBC Radio3 tribute which is for now available and comes thoroughly recommended. Pat Moran, as far as I know, didn't make any more recordings leading a group of her own. Bev Kelly, however, went on to make what I think is one of the best jazz vocal LPs ever, Love Locked Out, at the start of the '60s, featuring among others Kenny Burrell, and gorgeous performances such as Lonelyville. There isn't as far as I know any vintage footage of Pat Moran or Bev Kelly, but there is a little of Scott LaFaro appearing on a show called Stars of Jazz which has a Bethlehem connection.
Posted by Yr Heartout at 01:52