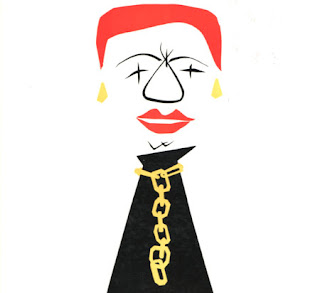 Ghosts of Midnight is the latest edition of Your Heart Out which can be downloaded here free for all as a pdf. It is an affectionate tribute to the 1950s jazz label Bethlehem and some of its voices. Among those voices was the fantastic Frances Faye, whom I first came across via a CD that collected a couple of her Bethlehem LPs under the umbrella title of Frances Faye Sings, Russell Garcia Conducts. One of those was of Frances singing folk songs, and is perhaps her least typical work. Nevertheless it is a stunning work, with highlights like Go 'Way From My Window, the John Jacob Niles song.
Frances was a remarkable performer, with a penchant for pounding the piano and hollering like hell. The wise guys in the '30s loved her cabaret spots, and clips posted on YouTube such as the one where she and Martha Raye are scatting away like mad give an idea why the gangsters would have been eating out of her hand.
Bruce Weber has done a great job of immortalising Frances by placing her right at the heart of his own extraordinary film Chop Suey. It includes some amazing footage of Frances, which hasn't surfaced on YouTube (yet), where she seems as dangerous as Jerry Lee Lewis in the late '50s.
Ironically Frances' name may be best known now for a couple of recordings which remain favourites of jazz and soul DJs, such as her early '50s uptempo rendition of Summertime and her astonishing cover of I'm Coming Home from the early '60s (a song that itself has a couple of Bethlehem connections) which was arranged by Shorty Rogers.
I bet Frances was accused of many things during her lifetime, but age did not mellow her as this brief but astonishing clip shows ...
Posted by Yr Heartout at 02:35