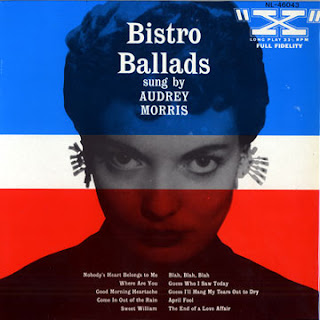 Ghosts of Midnight is the latest edition of Your Heart Out which can be downloaded here free for all as a pdf. It is an affectionate tribute to the 1950s jazz label Bethlehem and some of its voices. One of these voices is that of Audrey Morris'. She recorded one LP for Bethlehem in the mid-'50s, which featured some gorgeous tracks. The LP was recorded out in Hollywood and arranged by the great Marty Paich. Audrey had recorded one earlier LP, which is a particular favourite of mine, called Bistro Ballads. And, yes, Audrey is particularly wonderful singing the intimate torch songs on this record, such as Where Are You? Incidentally Audrey is accompanied on this LP by the great Johnny Pate on bass long before he had success with The Impressions. A lot of the Bethlehem singers sort of drifted out of music, but Audrey has carved a niche for herself as a cabaret performer in her native Chicago. After a long recording hiatus, she would make a series of LPs including one of old Film Noir numbers. Among those included on that LP is a particular favourite, Ace In The Hole, which Gloria Grahame is seen performing in The Naked Alibi. Torch songs and film noir ... these are two of my favourite things.