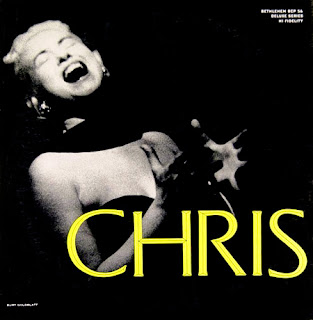 Ghosts of Midnight is the latest edition of Your Heart Out which can be downloaded here free for all as a pdf. It is an affectionate tribute to the 1950s jazz label Bethlehem and some of its voices. Bethlehem as a record company hit on something magical in 1954 when Creed Taylor took Gus Wildi's label and set some great ideas in motion. First and foremost among these was to get the jazz singer Chris Connor to record a set of intimate songs in a small group setting, capturing an after-hours feel, and promote this 10" LP in a gorgeous sleeve designed by Burt Goldblatt. It set the tone for how Bethlehem would conduct itself as a label, and that combination of ideas and talents is still an intoxicating one. Chris Connor went on to sing on many special records. Creed Taylor would come up with many great schemes. Burt Goldblatt would design many wonderful sleeves. Bethlehem would release many more fantastic jazz LPs. And it was the magic of those early Chris Connor recordings on Bethlehem that changed so much. Chris certainly inspired a whole host of other singers, and brought out the best in many musicians. If you twisted my arm and asked me to pick a particular favourite Chris Connor record it would be the third set she recorded for Bethlehem, from 1955, with a group featuring Ralph Sharon on piano, Herbie Mann on flute, and Joe Puma on guitar. It's got some really special moments on ...