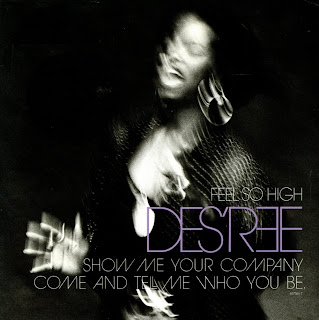 “Unfinished Sympathy’s more politicised and less agonised twin entered the charts on the same day – signalling a new start for British black music,” stated Garry Mulholland boldly, writing about the Young Disciples’ Apparently Nothin’, in his excellent book This Is Uncool. Much has been written about Massive Attack and the Bristol blues and roots. It is a fascinating subject, after all. But the Young Disciples’ story has a similarly rewarding tangle of sources to explore. And in many ways it covers stranger territory because of the way they only left us the one big statement, the Road To Freedom LP, which they have resolutely refused to expand upon or follow-up.

The Young Disciples’ Femi and Marco emerged from the late ‘80s London rare groove and hip hop scenes, and this background is as celebrated in their music as the reggae sound systems and post-punk influences in the Massive Attack mix. Road To Freedom was an unapologetically fragmented work, featuring contributions from London’s ‘positivity’ pioneers I.G. Culture (then with Dodge City productions), Outlaw Posse, and M.C. Mell ‘O’ (whose Thoughts Released has been salvaged by Original Dope imprint and sounds amazing, with Mell ‘O’ and DJ Pogo giving the Gang Starr guys some competition ... I wish I had realised that at the time), and a drift towards the jazzy abstract hip hop instrumentals which would come to the fore as the ‘90s progressed.

The performances of Shara Nelson and Carleen Anderson on Unfinished Sympathy and Apparently Nothin’, respectively, still grab the listener by the throat. It’s interesting that both singers had impeccable credentials. Shara had links with On-U Sound through the ‘80s, and Carleen’s parents had been part of James Brown’s inner circle. You can just imagine the ‘click’ moment when Femi and Marco met Carleen, heard her sing, and realised who her parents were. The same thing must have happened when Neneh Cherry met The Pop Group crowd. But whereas Neneh was a wild child, Carleen when she met the YDs had endured trouble and strife, and she caught something of that in her lyrics magnificently. Apparently Nothin’, in particular, has one of the most uncompromising of openings: “A popularity of invasion. Handed down through centuries. A force of arms called gentle persuasion. What have we learned from history?”

One young singer who perhaps did benefit from the success of the Young Disciples and Massive Attack was Des’ree. There is a direct link, too, as Sun of ’79 on her debut LP Mind Adventures was produced by the Young Disciples and engineered by Brendan Lynch. Oddly it is the only track on that LP that sounds tied to a particular place and time. The LP’s main producers, Phil Legg and/or Ashley Ingram, generally captured a very classy sound that is strangely warm and wonderfully understated. Perhaps Phil Legg had learned some valuable lessons about restraint from his time working at Robin Millar’s Powerplant studios in the late ‘80s.

While Des’ree’s debut certainly connects with the British radical tradition of Joan Armatrading and Linda Lewis, there is something about it that suggests the work of singer/songwriters like Carole King and Laura Nyro in the 1970s where their work was so steeped in soul music, the same soul music their songs helped shape. I am thinking of records like Fantasy, Music, Rhymes & Reasons, Smile, Nested ( light pop’s principle!); the sort of record that gradually improves with each subsequent listening over the years, like Des’ree’s Mind Adventures. I am also trying to resist picking up on any coincidence about Laura singing Desiree on Gonna Take A Miracle.

Feel So High was the song that introduced Des’ree to the world. It was one of those songs that seemed to come out of nowhere, and every time it came on the radio you found yourself holding your breath. There were a few soul records around in the early ‘90s that had the same effect, like Dreams by Gabrielle and Revival by Martine Girault, and still do. Maybe it was something in the air at the time, a certain climate. Since then there’s been a great procession of subversive soul (or call it what you like) that has often been the most inventive music around if not always the most successful in terms of sales and recognition.

Ashley Ingram as one of the producers behind Mind Adventures was well placed to bring a touch of subtle subversion to the proceedings. He was a member of Imagination, who turned pop music upside down when they appeared on the scene in the early ‘80s. The story of Imagination is one of the strangest in pop. Three guys with a very definite idea about what they want to do in terms of creating a slinky, erotic sound enter a partnership with unknown producers Swain & Jolley and hit the jackpot straight away with Body Talk. A string of hits followed, which sounded fantastic on the radio but the impact of Imagination reverberated right around.

You can hear the influence of Imagination on some of the other acts of the day. Orange Juice, circa Rip It Up, spring to mind (with the squelchy bass lines) as typical of groups graduating through punk and wanting to stretch themselves. While Edwyn and the OJs camped it up to annoy neds, Imagination vamped it up altogether more spectacularly with a series of provocative prime time Top of the Pops appearances that played havoc with traditional ideas about black pop presentation and which no doubt had many Sun readers spluttering in disbelief. Prince, I’m sure, would have been taking notes about the Imagination approach.

Imagination’s masterstroke was to release Nightdubbing, a collection of disco dub reworkings of their hits. More than just clever punning, these were fantastic re-imaginings of what were already adventurous works. What made the move even more bizarre was that the production team of Swain & Jolley were not known as experimentalists in the way, say, Martin Rushent or Martin Hannett were. Indeed the acts Swain & Jolley are most closely associated with are Spandau Ballet and Bananarama. Larry Levan was responsible for one of the Nightdubbing mixes (despite the tricks of history neither he nor Paradise Garage were household names in the UK in 1983), and it’s not exactly stretching things to note similarities between what Imagination were doing and what Levan would do with the Peech Boys. And, it has to be mentioned, the Peech Boys’ Bernard Fowler would become involved with Adrian Sherwood and the On-U Sound family whose influence on Massive Attack has been well noted.