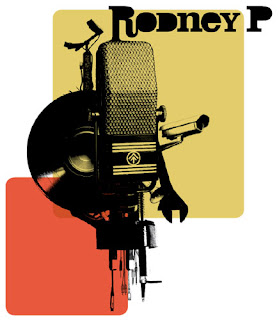 It is easy to lose track. It is impossible to keep up with everything. It can be all-consuming chasing after new information, foraging around in forgotten corners, following up clues from unknown territories. So, if you immerse yourself in something, inevitably other things pass by unnoticed. Then something happens. An overheard word, perhaps, or a stray reference can catapult a particular person back into the centre of your thoughts, uninvited. And it is then that, with a jolt and quizzical look, you have to play catch-up, foraging around in formerly frequented places, following up clues about familiars.
“How’s life in London?” That is the overheard phrase that triggered this. A knowing reference, perhaps, to the London Posse track which has taken on a mythical status. The London Posse’s Rodney P and Bionic realised early on in the hip hop stakes that it wasn't worth taking on the American rappers at their own game so they twisted things, used their native tongue, the city slang, played up the colloquialisms, in the same way that London reggae MCs like Papa Levi and Smiley Culture had done a few years previously.
The UK hasn’t been great at celebrating its hip hop heritage. But from the off there’s been some fantastic, fiery and inventive music made in that arena. Demon Boyz, Rebel MC, Caveman, Overlord X, Gunshot, Cookie Crew, Blak Twang and MC Buzz B are among the pioneers that spring to mind. Indeed, one of the many Cherry Red imprints, Original Dope Recordings has started salvaging lost classics from Ruthless Rap Assassins, Blade, MC Duke, MC Mell ‘O’ and Silver Bullet as the start of what could be an invaluable project.
If I’m entirely honest when I think of Rodney P it’s a Rodney P from a different era than the London Posse. I am inclined to associate him with the whole Ronin/Skitz/Deckwrecka/Roots Manuva thing around the turn of the millennium. I would be the first to confess a large part of the attraction was the involvement of the 23 Skidoo guys in running the label. Nevertheless the Skitz Countryman LP still feels like a genuine classic, with fantastic contributions from Hijack, Roots Manuva, Phi-Life Cypher and Rodney P, among others. And I could bore for hours about the magnificence of the Domestic Science track featuring Wildflower, Tempa and Estelle.
I like, the self-styled Riddim Killa, Rodney P a lot. He’s got that rowdy swagger and brooding intelligence which is a combination that makes just about everybody feel uneasy. He’s a bona fide legend in his own lifetime, but is perhaps more respected than listened to. By me, at least, and I wouldn’t want to be quizzed too closely on his back catalogue. But with his name back on my radar, giving my conscience a little jab in the ribs, I set out to have a bit of a hunt around to reacquaint myself with Rodney P’s works, and in particular any collaborations I might have missed out on. And one of the things I chanced upon was All My Love (Goes Your Way) by Rodney P featuring Cascade which seemed to date back to 2004. It sounded great, too, with a pretty elusive liquid funk sound, but not in the euphoric, utility house sense that so many MCs would have to contend with.
Actually on closer investigation it turned out the track was the work of production team United State, who used the talents of Rodney on this track which was put out by Futureproof, out of west London (hence the Carnival scenes in the video), an umbrella organisation that has released records, got involved in production, digital distribution, management and promotional activity. Futureproof itself grew out of a successful club night in Notting Hill, featuring hip hop and r&b. And the person behind it and United State is Phil Legg, a name I recognise very well. Among the people who DJ’d at Futureproof seems to have been Andrea Oliver and Neneh Cherry. Neneh has also recorded with United State, though that’s not the first time Neneh Cherry and Phil Legg have appeared together on the credits of a record.
I can clear a room in moments when I get on to explaining exactly how, Shotgun, a long-forgotten record by Jamie J. Morgan provides the perfect link between the ‘80s and the ‘90s, and is probably the most incredibly well-connected LP ever, and how you could lose yourself for hours tracing connections. Its credits, which it is memorable for, feature, among others, Bruce Smith, Sean Oliver, Adam Kidron, Richard Mazda, 3D, Mushroom, Nellee Hooper, Jazzie B, Caron Wheeler, Claudia Fontaine, Tim Simenon, Jomanda, Sam Sever, Cameron McVay, Fred Wesley, Jon Moss, Jean Baptiste Mondino, Ian Swift, Neville Brody. Plus Phil Legg and Neneh Cherry. And Jamie’s name is indelibly linked to Neneh’s through his writing credit on her immortal Buffalo Stance. Indeed Neneh’s own Raw Like Sushi does pretty well in the credits stakes, with the Wild Bunch and Tim Simenon featuring alongside Nick Plytas, Wil Malone, and others.
If Jamie Morgan’s name does seem familiar it’s probably more likely to be in connection with his metier of fashion photography, and in particular the whole Buffalo phenomenon. You know, the 1980s, Ray Petri, Judy Blame, designers, photographers, stylists, models, MA1 flying jackets, Timberland boots, rockabilly haircuts, spreads in The Face, i-D, Arena, that Nick Kamen Levi’s ad, ideas and images that filtered down into so many aspects of everyday life. And Neneh’s Buffalo Stance, of course. Style over substance? Depends. This was a world, let’s not forget, the Wild Bunch moved comfortably in while laying the foundations for what was to come.
So Phil Legg, yeah. It’s a name that pops up in so many interesting places. It’s tempting to read too much into that. So, let’s just take a selection of tracks and share a few thoughts. And see where it takes us ...