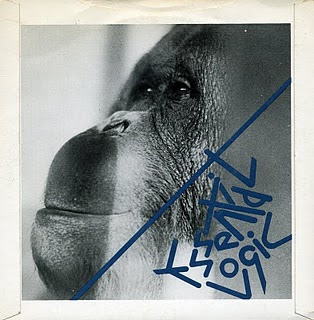 Lora Logic’s Pedigree Charm is the great lost classic from that golden age of Rough Trade recordings. It is one of the most gloriously, infectious, uplifting, exuberant, playful LPs ever made. I’m pretty sure I never appreciated that at the time. It was, after all, a delayed release, which finally appeared well into 1982 when attention had wandered somewhat away from freeform funky pop. Nevertheless, with the benefit of hindsight, Pedigree Charm is the only British recording of that era which can compete with Lizzy Mercier Descloux’s Mambo Nassau.
It’s easy to imagine now how Pedigree Charm would have been put together in a musical climate where Ornette Coleman’s Of Human Feelings and Michael Jackson’s Off The Wall might be played constantly alongside lots of contemporary afro beat and reggae and early rap recordings. That’s pure speculation, of course. What we do know is that Lora put this LP in 1981 with Phil Legg, her guitarist from Essential Logic, in the studios they called Milton Groovy, Arizona. This was a venture they had entered into with This Heat, and is of course better known as the Cold Storage studios in Brixton, which have acquired a supreme significance over the years on a par with Can’s Inner Space and Lee Perry’s Black Ark.
Lora and Phil entered into a partnership with This Heat to develop the Cold Storage space into a recording studio, and as far as I understand it Pedigree Charm was put together during that transitional process. It is written about in the beatification of This Heat that this studio conversion somehow sullied the sanctity of the space, which is arrant nonsense. Essential Logicians were hardly harbingers of Mammon, though perhaps they bought some pop to the party. Anyway, Charles Hayward played drums on Pedigree Charm. And just as significantly, around the same time, Lora played on Dennis Bovell’s extraordinarily eclectic masterpiece Brain Damage.
Pedigree Charm is a lot looser than the earlier Essential Logic recordings, wonderful though they were. The prominent feature is the often absurdly funky bass playing of Ben Annesley, about whom I know shamefully little. The only other recordings I know on which he played are Red Crayola ones. One of which was (the recorded in Dennis Bovell’s Studio 80) Kangaroo? And the other was the later Black Snakes, which was Mayo Thompson’s great pop moment, positively Postcardian at times, despite the presence of the Art & Language guys with their lyrical discourse. Those wads of words can seem utterly charmless in the pop context, and I have to say they wash right over me, but the songs still sound great on those two LPs. The more collaborative Kangaroo? with Gina Birch and Lora Logic helping out with the singing always makes me think of some ancient agit prop cabaret musical drama where you’re tempted to evoke the name of Brecht. Ah but didn’t I read Greil Marcus somewhere mentioning en passant that Lora Logic was distantly related to Kurt Weill?
Gina Birch and Lora Logic had extraordinary voices. I like the fact that they were allowed to use such unique, and still instantly recognisable voices. I really like the way Mayo Thompson, in some ways a figure from another time and place, decided that from these new circles he was moving in Gina and Lora were the ideal singers to use on a record of his. And the way Gina and Lora tackle the Art & Language text is a delight. Is it too absurd to compare Kangaroo? to the extraordinary records Carla Bley made using the words and poetry of Paul Haines with a range of guest singers?
I always had a bit of a sense that even among the Rough Trade community Essential Logic were essentially outsiders, and not really part of any inner circle. That judgement may be patently unfair to many people, and certainly Geoff Travis and co. deserve credit for backing the band over a period of time. But somehow the delayed release of Pedigree Charm adds to that sense of not being among the favoured few. And I am not sure that the reappraisal process covering the post-punk spheres of activity has really redressed the balance.
The American label Kill Rock Stars was an important and early player in the post-punk archaeological activity that took place, and deserves particular credit for the sets it put together. Its Essential Logic collection pretty much covers Lora’s recordings, but there are definitely gaps. I begin to wonder, for example, if I dreamt up what I thought was my favourite Essential Logic moment, the single Eugene. And it would be lovely to have discrete editions of Lora’s actual LPs, Beat Rhythm News and Pedigree Charm, with perhaps another set covering stray singles and whatnots. But it is nevertheless a good thing that the KRS collection exists, and while I am not his greatest fan I have no quibble about Greil Marcus providing the sleevenotes on this occasion, even if I don’t agree with everything he writes.
Greil, to give him credit, wrote the best thing ever about Lora and her music, back in 1979, which was reprinted in that odd collection In The Fascist Bathroom. You would not ordinarily find me quoting the holy Greil, but this captures things very nicely: “The spirit of pure fun drives the band’s music – nothing could be more gleefully imaginative – but the woman in the lead is so unusual, so full of nerve and good ideas, that she can make most everything else on or off the radio seem cowardly and complacent, a failure of will or brains or both, the result of compromises likely not evident even to those who’ve made them.” And yet there Greil was writing about the major label EP Wake Up which sounds positively pedestrian compared to the boisterous romps that feature on Pedigree Charm.